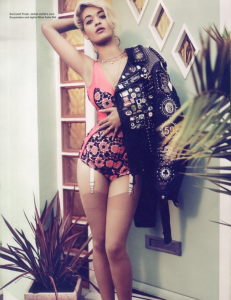 Rita Ora looking incredibly sexy with her nude stockings. She is a British singer-songwriter. In 2012, Ora released her debut album, Ora which debuted at number one in the United Kingdom. It also spawned three number-one singles “Hot Right Now”, “How We Do (Party)” and “R.I.P.” which made Ora the artist with the most number-one singles on the UK Singles Chart in 2012.

Throughout 2011, Ora released viral videos of herself working on her debut album.[15] On 14 December 2011, DJ Fresh and Ora released the music video for “Hot Right Now” on YouTube. The single was released on 12 February 2012 and reached No. 1 on the UK Singles Chart. On 24 February 2012, Ora visited New York’s Z100 radio station alongside her Roc Nation label boss Jay-Z, to premiere “How We Do (Party)”, her debut single and the lead single from her upcoming studio album. “How We Do (Party)” borrows its familiar refrain from The Notorious B.I.G.’s “Party and Bullshit”. She took two years to completely finish her first studio album. will.i.am, Ester Dean, Drake, The-Dream, Kanye West and Stargate all worked with Ora on her debut album. 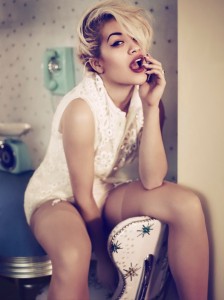 When speaking about the sound of the album and its concept, Ora said it “definitely has pop in it, but (…) you can hear influences of jazz in there, you can hear influences of Monica and Aaliyah, and then you can hear Gwen Stefani.” She has also stated the album will be influenced by her father’s record collection which, in addition to reggae, also includes such artists as Eric Clapton and B.B. King. Her first solo record, “R.I.P.” featuring Tinie Tempah, was released as her first UK single on 6 May 2012. The video directed by Emil Nava was recorded in Hackney, East London, and released on 4 April 2012. Produced by Chase & Status, the song debuted at the top of the UK Singles Chart, becoming her first solo UK number 1, and second overall. In May, Ora became a guest judge on the ninth series of The X Factor in the UK, with the auditions filmed at the O2 Arena, London.

Whilst touring with Coldplay, she later announced that the album would be named Ora. Ora was released on 27 August 2012 and debuted at the top the UK Albums Chart.[28] Her video, “Shine Ya Light”, sees the singer return to Kosovo from where she originated, riding with a flank of bikers and gigging for excited hometown crowds. Ora was nominated for Best UK/Ireland Act, Best New Artist, and Push Artist at the 2012 MTV Europe Music Awards.

Ora will embark on her eight-date UK Radioactive Tour on January 28 through to February 9, 2013. On 14 January 2012, Ora revealed that her second album would be much clear and have more direction than her debut; “I definitely know what I want more and it’s pretty straightforward with what I’m trying to say with this second album”. 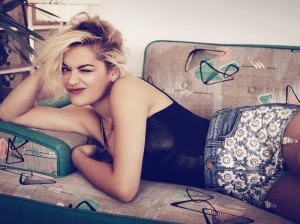 Ora has a mezzo-soprano vocal range.

Ora is nominated for three awards at the 2013 BRIT Awards, including the Brit Award for Best British Breakthrough Act.