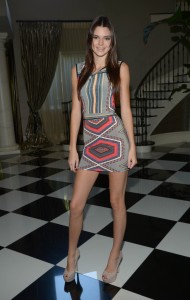 Kendall Nicole Jenner (born November 3, 1995) is an American reality television star, television personality, model, and brand ambassador for Seventeen Magazine. She is best known for appearing on the E! reality TV show Keeping Up with the Kardashians that she shares with her family.

She has modeled for the Sherri Hill dress line, which specializes in dresses for proms and pageants. Jenner was featured in People magazine’s “Beautiful People” article. Jenner is also a runway model and appears at public events.