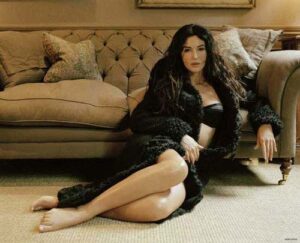 Monica Bellucci began modeling at age 13 by posing for a local photo enthusiast.

In 1988, Bellucci moved to one of Europe’s fashion centers, Milan, where she signed with Elite Model Management. By 1989, she was becoming prominent as a fashion model in Paris and across the Atlantic, in New York City. She posed for Dolce & Gabbana and French Elle, among others. In that year, Bellucci made the transition to acting and began taking acting classes. The February 2001 Esquire’s feature on Desire featured Bellucci on the cover and in an article on the five senses. In 2003, she was featured in Maxim. Men’s Health also named her one of the “100 Hottest Women of All-Time”, ranking her at No. 21. AskMen named her the number one most desirable woman in 2002.

Bellucci’s modelling career is managed by Elite+ in New York City. She is considered an Italian sex symbol. From 2006 to 2010 she was the face of a range of Dior products. Bellucci is signed to D’management group in Milan and also to Storm Model Management in London.

In 2004, while pregnant with her daughter Deva, Bellucci posed nude for the Italian Vanity Fair Magazine in protest against Italian laws, that prevent the use of donor sperm. She posed pregnant and semi-nude again for the magazine’s April 2010 issue.