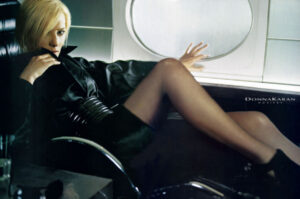 She came to international attention for her role as Elizabeth I of England in the 1998 film Elizabeth, for which she won British Academy of Film and Television Arts (BAFTA) and Golden Globe awards, and earned her first Academy Award nomination for Best Actress. Blanchett appeared as the elf Lady Galadriel in Peter Jackson’s The Lord of the Rings trilogy from 2001 to 2003. In 2004, Blanchett’s portrayal of Katharine Hepburn in Martin Scorsese’s The Aviator brought her numerous awards, including an Academy Award for Best Supporting Actress.