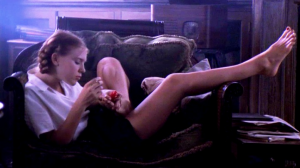 Dominique Ariane Swain (born August 12, 1980) is an American actress. She is best known for her roles as the title character in the 1997 film adaptation of Vladimir Nabokov’s novel Lolita, and as Jamie Archer in the film Face/Off.

Swain was born in Malibu, California, the daughter of Cindy (née Fitzgerald) and David Swain, Sr., an electrical engineer. Swain grew up with four siblings and was a student at Malibu High School. Her sister is the actress Chelse Swain.