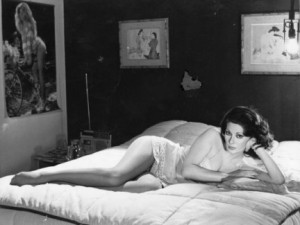 Edvige Fenech starred in many genres of cinema but her greatest commercial success came with commedia sexy all’italiana films, particulary including earlier works Ubalda, All Naked and Warm and Giovannona Long-Thigh, as well as the following l’insegnante (school teacher), la soldatessa (soldier), la poliziotta (policewoman) series and other films that featured Fenech in stereotypical professions, which further bolstered Fenech’s position as the most popular actress of the genre. She often paired with Carlo Giuffrè and later with Renzo Montagnani in commedia sexy films.

Fenech was also a regular in giallo films. Her works in this genre include Five Dolls for an August Moon, The Strange Vice of Mrs. Wardh, Your Vice Is a Locked Room and Only I Have the Key, All the Colors of the Dark, The Case of the Bloody Iris, and Nude per l’assassino.