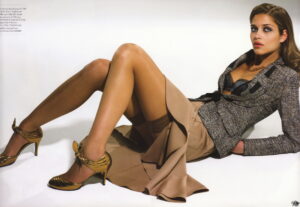 Ana Beatriz Barros (born 29 May 1982) is a Brazilian model known for her multiple appearances on the SI Swimsuit issues and for her work with Guess?, bebe, Victoria’s Secret, Chanel cosmetics, and Jennifer Lopez’s JLO fashion line.

When she was 13, Barros and her older sister, Patricia, were vacationing in Rio de Janeiro when they were spotted by a representative from Elite Model Management.

Barros was encouraged by the Rio Elite office to participate in the Elite Model Look 1996, which she was runner up to Diana Kovalchuk. Barros subsequently competed for international Elite Model Look and placed second worldwide. Elite sent her portfolio and recent Polaroid shots to GUESS? which led her to do the Millennium GUESS? campaign along with her friend and fellow Brazilian model Alessandra Ambrosio.

In addition to Guess?, Barros has done advertisements for Christian Dior, Armani Jeans, Oakley, L’Oréal, Diesel, Victoria’s Secret, Chanel cosmetics, and Jennifer Lopez’s JLO fashion line, among others. In 2004 Jennifer Lopez selected Barros to be the face of her new lingerie line, JLO Lingerie. Lopez said, “I wanted someone young, sexy and urban, with a universal appeal”. Barros has been in shows for the likes of Valentino, Missoni, Gucci, Christian Dior, Versace, Emporio Armani, BCBG, DKNY, Jean-Paul Gaultier, Dolce & Gabbana, Michael Kors, Red Oak, Elie Saab and many more prestigious fashion houses. She walked in the Victoria’s Secret Fashion Show in 2002, 2003, 2005, 2006, 2008, and 2009.

She was chosen to be in the 2010 Pirelli Calendar photographed by Terry Richardson in Bahia, Brazil, alongside Lily Cole, Daisy Lowe, Miranda Kerr and other models. Barros replaced Lindsay Lohan for Fornarina’s Spring Summer 2010 campaign and look book. She has already filmed her first commercial for the company. Barros was also featured in the 2010 Spring/Summer campaign for British retailer Marks and Spencers alongside Twiggy, VV Brown, Lisa Snowdon and Dannii Minogue