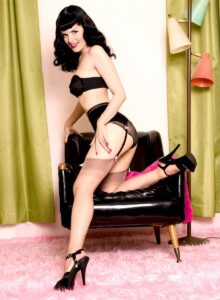 Bernadette Souza was born on January 13, 1970 in Camp Hill, Pennsylvania to Joe, a retired sailor from the Philippines, and Sherry, a burlesque dancer from Oklahoma. When she was 18, she won Miss Teen San Diego County and initially pursued a career in acting and modelling. She trained at cosmetology school and then worked freelance on photoshoots. It was on a shoot in 2002 that Dexter, at the age of 32, was photographed herself by Danielle Bedics. She entered the photographs in the Viva Las Vegas pin-up contest, receiving such a positive response that she decided to make Pin Up modelling her career focus.