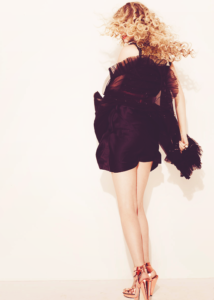 Taylor Alison Swift is an American singer-songwriter. Raised in Wyomissing, Pennsylvania, Swift moved to Nashville, Tennessee at the age of fourteen to pursue a career in country music. She signed with the independent label Big Machine Records and became the youngest songwriter ever hired by the Sony/ATV Music publishing house. The release of Swift’s self-titled debut album in October 2006 established her as a country music star. “Our Song”, her third single, made her the youngest person to single-handedly write and perform a number one song on the Hot Country Songs chart. She received a Best New Artist nomination at the 2008 Grammy Awards.

Swift’s second album, Fearless, was released in 2008. Buoyed by the pop crossover success of the singles “Love Story” and “You Belong with Me”, Fearless became the best-selling album of 2009. The record won four Grammy Awards, with Swift becoming the youngest ever Album of the Year winner. Swift’s third album, 2010’s Speak Now, sold over one million copies in its first week of US release. The album’s third single, “Mean”, won two Grammy Awards. In 2012, Swift released her fourth album, Red. Red’s opening US sales of 1.2 million were the highest recorded in a decade, with Swift becoming the only female artist to have two million-plus opening weeks. The singles “We Are Never Ever Getting Back Together” and “I Knew You Were Trouble” were worldwide hits.

Swift is known for narrative songs about her personal experiences. As a songwriter, she has been honored by the Nashville Songwriters Association and the Songwriters Hall of Fame. Swift’s other achievements include seven Grammy Awards, twelve Billboard Music Awards, eleven Country Music Association Awards and six Academy of Country Music Awards. She has sold over 26 million albums and 75 million digital single downloads. Forbes estimates that she is worth over $220 million. In addition to her music career, Swift has appeared as an actress in the ensemble comedy Valentine’s Day (2010) and the animated film The Lorax (2012). As a philanthropist, Swift supports arts education, children’s literacy, natural disaster relief, LGBT anti-discrimination efforts, and charities for sick children.