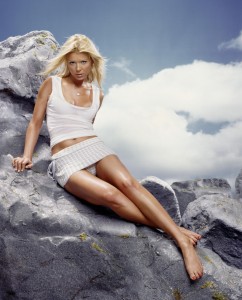 Tara Reid began acting at age nine, being a regular on the game show Child’s Play, and appeared in over 100 commercials for corporations including Jell-O, McDonald’s, Crayola and Milton Bradley. As a teenager, she was on Saved By The Bell: The New Class.

After moving to Hollywood in 1997, Reid transitioned to movies, landing her breakout role in 1998’s The Big Lebowski. Though the film disappointed at the box office, grossing only $17 million in the US, it has gone on to become a cult favorite. Later that same year she appeared in a pair of more financially successful films, Cruel Intentions and Urban Legend, each of which grossed just under $40 million in the US and led to two sequels each, though none included Reid. Reid found her first taste of real mainstream success when she portrayed the role of the virginal Vickie in the wildly successful American Pie (1999), which grossed over $100 million in US. The film also marked her first film to reach #1 at the box office. In 2001, she reprised the role in American Pie 2, which opened to $45 million and grossed over $145 million in the US, almost 50% more than its predecessor. Reid did not return for American Wedding (2003), but did reprise the character in the fourth theatrical film in the series, American Reunion (2012).

Following the success of American Pie 2, Reid starred in a string of commercial and critical misfires including Josie and the Pussycats and National Lampoon’s Van Wilder. She also starred as the youngest daughter of a Texas gynecologist in Robert Altman’s Dr. T and the Women, alongside Richard Gere. She returned to the small screen as a recurring character on the NBC sitcom, Scrubs, appearing in 11 episodes of Season 3. Shortly thereafter, Reid appeared alongside Ashton Kutcher in My Boss’s Daughter, for which she was nominated for both Worst Supporting Actress and Worst Screen Couple at the 2004 Golden Raspberry Awards. In 2005, she co-starred in infamous German filmmaker Uwe Boll’s Alone in the Dark alongside Christian Slater. Her mispronunciation of “Newfoundland” became a popular internet catch phrase. The film was panned by critics and Reid received a Razzie Award nomination for Worst Actress. As of October 2011, Reid has not headlined any wide release theatrical films since.

In January 2007, Reid filmed a commercial with Daniel Conn for Dodo, an Australian budget telephone and Internet provider. Reid signed on to host the E! Channel’s Wild On Tara Reid (later renamed Taradise), a program that showcased high society vacations and hot spots. The show premiered in October 2005 but was canceled in February 2006 due to poor ratings, with only eight of the 14 episodes aired. Between 2007 and 2008, she starred in a string of direct-to-video films, including 7-10 Split/Strike, If I Had Known I Was a Genius (which was released at the 2007 Sundance Film Festival), and Clean Break/Unnatural Causes. She also played the main character in the made-for-television horror film Vipers. In 2010, she landed the role of Bonnie in the thriller film The Fields, which was released in 2011.

Reid also has designed a clothing line with Ed Hardy designer Christian Audigier, entitled Mantra, that hit high end department stores in 2009. Reid appeared in a pictorial in the January/February 2010 issue of Playboy, although earlier reports had indicated she had posed nude for the magazine. In March 2011 she filmed a Funny or Die spoof trailer for The Big Lebowski 2.
On August 18, 2011, Reid was the second housemate to enter the British reality series Celebrity Big Brother 8. On September 2, she received the fewest votes and became the third celebrity to be evicted from the house.
In September 2011, Reid announced via her official Twitter page that she was to appear in Jedward’s new music video for “Wow Oh Wow”, which they started shooting in late October of the same year.