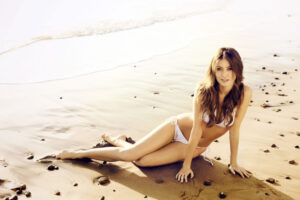 Summer Glau was born in San Antonio, Texas, where she grew up with her two younger sisters Kaitlin and Christie. She is of Scots-Irish and German descent. Her mother is a school teacher and her father a general contractor.

Glau received a scholarship to a ballet company and was home-schooled from grades 3 to 12 to accommodate her ballet training. Glau was classically trained as a ballet dancer and also studied tango and flamenco. After a broken toe ended her dancing career, Glau later moved to Los Angeles in 2002 to pursue a more active acting career.

Glau’s first television credit was a guest role as a ballerina on the 2002 episode “Waiting in the Wings” of the television series Angel. There she caught the eye of director Joss Whedon, who later cast her in his critically acclaimed but short-lived TV series Firefly as River Tam, a role she reprised for the show’s feature film sequel, Serenity. Glau previously auditioned for the role of a Power Ranger in Power Rangers Wild Force before meeting Whedon.

Glau appeared on the episode “Love Conquers Al” of the TV series Cold Case. She had a small role in the film Sleepover, in which she played a high school senior named Shelly. She also appeared in the CSI episode “What’s Eating Gilbert Grissom?”, and the second season of The Unit; portraying Crystal Burns, the girlfriend of Jeremy Erhart. In 2006, Glau played Tess Doerner, a paranoid schizophrenic returnee in the second season premiere of The 4400 (episode “Wake-Up Call”), and became a recurring character from season 3 onwards. She also starred in the science fiction film Mammoth. Glau was cast in the ABC Family TV movie The Initiation of Sarah.

In Terminator: The Sarah Connor Chronicles, a series that debuted January 13, 2008, Glau played the role of Cameron Phillips, a Terminator infiltration unit sent back to protect John Connor and Sarah Connor from Skynet. The seventh episode of the series, “The Demon Hand”, included several scenes in which Glau (in character as Cameron) dances ballet. Glau also guest starred as herself in the 2009 episode “The Terminator Decoupling” from the second season of the CBS situation comedy The Big Bang Theory.

On August 26, 2009, it was confirmed after much speculation that Glau would be joining the cast of Joss Whedon’s Dollhouse for at least two episodes in the early part of the show’s second season. She portrayed Bennett, the programmer for a rival Dollhouse. On March 12, 2010, it was announced that she would be joining the cast of NBC’s The Cape in a leading role. In June 2010, she was confirmed as the female lead in the horror comedy film Knights of Badassdom. On July 11, 2011, Glau was cast on Alphas as Skylar Adams, a recurring alpha and mother to Zoe Adams, and a former acquaintance of Dr. Rosen and Nina. Glau voiced Kara Zor-El in the DC Comics original animated movie Superman/Batman: Apocalypse.

Where to buy RHT hold-ups