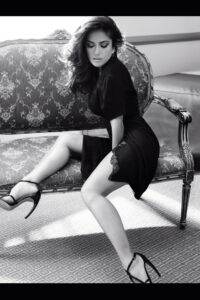 Salma Hayek Jiménez (born September 2, 1966) is a Mexican and American film actress, director and producer. She began her career in Mexico starring in the telenovela Teresa and went on to star in the film El Callejón de los Milagros (Miracle Alley) for which she was nominated for an Ariel Award. In 1991 Hayek moved to Hollywood and came to prominence with roles in Hollywood movies such as Desperado (1995), Dogma (1999), and Wild Wild West (1999).

Her breakthrough role was in the 2002 film Frida as Frida Kahlo for which she was nominated in the category of Best Actress for an Academy Award, BAFTA Award, Screen Actors Guild Award and Golden Globe Award. The movie received widespread attention and was a critical and commercial success. She won a Daytime Emmy Award for Outstanding Directing in a Children/Youth/Family Special in 2004 for The Maldonado Miracle and received an Emmy Award nomination for Outstanding Guest Actress in a Comedy Series in 2007 after guest-starring in the ABC television series Ugly Betty. She also guest-starred on the NBC comedy series 30 Rock from 2009 to 2013.

Hayek’s recent films include Grown Ups (2010) and Grown Ups 2 (2013), acting alongside Adam Sandler, and Puss in Boots (2011), in which she voices Kitty Softpaws, alongside her former collaborator Antonio Banderas.

At the age of 23, Hayek landed the title role in Teresa (1989), a successful Mexican telenovela that made her a star in Mexico. In 1994, Hayek starred in the film El Callejón de los Milagros (Miracle Alley), which has won more awards than any other movie in the history of Mexican cinema. For her performance, Hayek was nominated for an Ariel Award.

Hayek moved to Los Angeles, California, in 1991 to study acting under Stella Adler. Due to dyslexia, she had limited fluency in English. Robert Rodriguez and his producer and then wife Elizabeth Avellan soon gave Hayek a starring role opposite Antonio Banderas in 1995’s Desperado. She followed her role in Desperado with a brief role as a vampire queen in From Dusk Till Dawn, in which she performed a table-top snake dance.

Hayek had a starring role opposite Matthew Perry in the 1997 romantic comedy Fools Rush In. In 1999, she co-starred in Will Smith’s big-budget Wild Wild West, and played a supporting role in Kevin Smith’s Dogma. In 2000, Hayek had an uncredited acting part opposite Benicio del Toro in Traffic. In 2003, she reprised her role from Desperado by appearing in Once Upon a Time in Mexico, the final film of the Mariachi Trilogy.