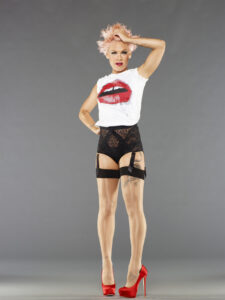 Alecia Beth Moore (born September 8, 1979), better known by her stage name Pink (stylized as P!nk), is an American singer-songwriter and actress. Originally a member of the girl group Choice, she began her solo career with the 2000 single “There You Go”, which was also included on her debut album, Can’t Take Me Home, released later that year. The R&B album went on to be certified double-platinum in the United States. She gained further recognition upon collaborating with Lil’ Kim, Christina Aguilera and Mýa for a cover of “Lady Marmalade” for the 2001 Moulin Rouge! soundtrack. That cover earned Pink her first Grammy Award (for Best Pop Collaboration with Vocals) as well as her first number-one single on the Billboard Hot 100.

Although she originally faced opposition from her record label, Pink aimed to make her second album more personal and more pop rock-oriented. The product, 2001’s Missundaztood, proved to be her most successful album to date, with sales in excess of 12 million copies. The album’s biggest singles, “Get the Party Started”, “Don’t Let Me Get Me”, and “Just Like a Pill”, all charted in the top ten in the US and the UK, with the latter becoming her first UK-number one. In November 2003, Pink released her third album, Try This, preceded by the single “Trouble”. Although not her most successful album, Try This earned Pink her first solo Grammy Award, for best female rock vocal performance.

After a short hiatus, her fourth studio album, I’m Not Dead, was released in April 2006. With the help of successful singles “Stupid Girls”, “Who Knew”, and “U + Ur Hand”, I’m Not Dead marked a revival in Pink’s popularity, both in the US and worldwide. Pink’s fifth album, Funhouse, was released in late 2008 and was preceded by her first solo number one on the Billboard Hot 100, “So What”. The album was certified double-platinum in the US and prompted Pink to go on the record-breaking Funhouse Tour. Her first compilation album, Greatest Hits… So Far!!!, was released in November 2010 and produced two chart-topping singles, “Raise Your Glass” and “Fuckin’ Perfect”. Her latest album, The Truth About Love, was released in 2012 and became her first number one album in the United States. The album’s three singles, “Blow Me (One Last Kiss)”, “Try”, and “Just Give Me a Reason”, all reached the top ten of the Billboard Hot 100, with “Just Give Me a Reason” becoming her 4th number-one single. The Truth About Love was the top selling album of 2013 by a female artist with 886,000 units sold by year-end.

Pink has become one of the most successful artists of her generation, having sold over 50 million albums and 95 million singles worldwide as of 2014. Her career accolades include three Grammy Awards, a Brit Award, and six MTV Video Music Awards. Additionally, Pink has had 19 top-twenty hits on the Billboard Hot 100. In 2009, Billboard magazine named Pink the #1 pop musician of the decade, in 2012 VH1 named Pink #10 on their list of the 100 Greatest Women in Music, and in 2013 Billboard named Moore the Woman of the Year. Her net worth as of January 2014 is estimated to be around $115 million, making her one of the most commercially successful artists of her generation.