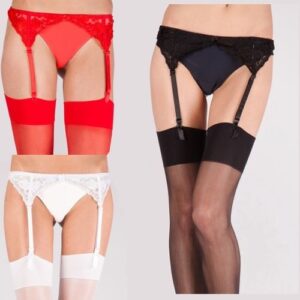 – I have just had a look at the old pictures on the Spick & Span site, and despite the pics being from what appears to be the sixties, and the stockings being either FFs or RHT, many of the models are wearing totally inappropriate suspenders.
The ones I refer to consist of just a narrow, frilly loop of elastic around the waist with frilly straps, or ones that are completely covered by the narrow hipster style panties.
As the fashions worn with these horrible looking items seem to be from the later ’60s when stockings were being overtaken by the dreaded PH, perhaps this was one of the reasons stockings went the way of the Dodo as far as regular use is concerned. If these sussies were all that was available, then I don’t blame the girls of the that time giving them the heave-ho.
Now when stockings made a brief re-appearance in the late 80s, the stocking manufacturers (in an effort perhaps to “educate” the inexperienced) packaged two pairs along with very cheap suspenders. This again I suspect caused the demise of the second coming, as no suitable alternatives were available. I remember that was when the stay-ups started to appear, as perhaps a last ditch effort to sell stockings.
I recall from the early ’90s overhearing two girls discussing their stockings, and both were saying that they had endless trouble keeping their stockings up as their belts just kept twisting and working their way down.
I knew then that it wouldn’t be long before the girls would give up wearing of stockings due to inadequate foundations being worn with them
– I agree 100% with your comments. Only now are a few manufacturers providing the right size of suspenders for all day comfort. Its a pity that this didn’t happen 40 years ago as if it had stockings would still be popular.
– Excellent observation! In the ’60s and even in the late ’50s the frilly, insubstantial garterbelts you described were available but not purchased by any woman for daily use. These types of garterbelts were “recreational” models. They were intended as visually stimulating frou frou, not as working models. They were not big sellers.
As you know, the young ladies you saw on the Spick & Span site were models whose photos were taken to provide male visual stimulation. The idea being conveyed was that these women were wearing these types of garterbelts simply as a means to attractively hold up their stockings for a short period of time. We were to presume that these alluring women were “available” (at least in our male fantasies) and that these photos were to show us girl-next-door type women who were ready and willing to engage in sex with us. The fantasy was further fed by a subliminal message that a legitimate garterbelt was therefore unnecessary since these women would be horizontal in a short time and the flimsiness of these belts would not matter. Said another way, the frilly belts were single-purpose pleasure attire.
But, you are entirely right that most modern manufacturers now perceive stockings and garterbelts as a kind of sex uniform or costume. So, a substantial daily use garterbelt has become esoterica. If you really want one you’ve got to either know where to find one or you’ve got to search to find it. It’s a shame because, as you pointed out, these manufacturers plant the seeds of their own destruction every time they produce what I call a “pretend” garterbelt. Women don’t wear them on a daily basis because they can’t. This naturally limits the market. So, most women save them to wear only once in a while (a special date, an anniversary, etc) when they choose to put the promise of sex in the air. This further conditions both the women and their men to view the garterbelt and stocking combination as an invitation to sex.
This site has demonstrated that many women want to wear stockings simply because they like them. They aren’t always trying to send a “take me to bed now” message. They simply enjoy the features and feeling of stockings. You may have noticed that it isn’t long before new wearers of stockings start asking the group where they can find a useful garterbelt. Too bad most of the manufacturers don’t pay attention.
We males are so visually oriented. Sophisticated women know this. And, while a woman who chooses to wear a garterbelt and stockings on a daily basis isn’t necessarily advertising her willingness to engage in sex she is (or should be) completely aware of the power these garments (and any other intimate garment) have over men.
Power is the greatest aphrodisiac. It must be a very satisfying and stimulating feeling for a stockings-wearing woman to know that she wears beneath her skirt objects of male veneration. It must be a tremendous mental boost to know that by simply raising her hem a few inches, “innocently” parting her legs at just the right moment or crossing them in a routine fashion, she can attract the attention of every straight male in the room in a manner that non-stockings wearers can never achieve. It must be very empowering indeed to have this secret knowledge at one’s disposal every day one chooses to wear stockings to the office or the store. It must be a real self-confidence enhancement to know that a woman can use her legs, stockings and garterbelt to hold a man’s attention and, maybe more importantly, to stay in his mind long after she has left.
On the one hand I wish more women knew the power of stockings you mentioned in your last paragraph but, on the other hand I don’t think my heart could take it!