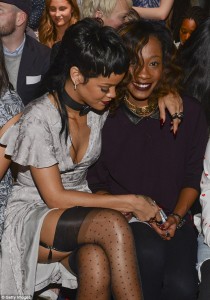 “On the question of telling between stockings and tights one can’t differentiate between them on creases alone, there is more info needed. However on the what I would call ‘fitted’ stockings then creasing can occur at the knees as well. One can tell if they’re full fashioned or RHT types as these are distinctive, some tights look like FF but can be easily spotted as the detail up the back of the calves is missing on the tights. These are the easy cases, one has to look elsewhere for telltale details such as suspender bumps at the back of the skirt. These too are not easy to spot but if the lighting conditions and skirt/dress material combination is right then, very easy. It is sometimes possible to observe the body language and see if the wearer is very conscious of what they’re wearing. This too can be a giveaway.
“On some occasions one can get a flash of stocking tops too. There are some types of stockings that have a very nice finish on them so this can be a sign. It isn’t just whether stockings can be detected but does the wearer give off signals that they might have them on. This would then prompt further investigation. These techniques work better when one is dealing with a new wearer as they won’t have very much skill and experience and so will be more of a giveaway.”
“It’s difficult to measure the accuracy of my technique because a Southern Gentleman never asks – except the lady he’s escorting. FF’s are extremely rare in the South, except for formal occasions around the holidays. However, I’ve developed a technique that has proven surprisingly accurate. After looking at a lady’s legs, I have a four-step search.