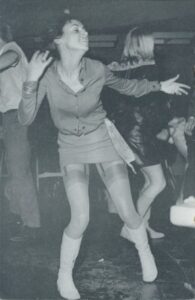 – Last night my wife and some friends hosted a charity event that had the disco era as its theme. Everyone dressed in period clothing and a popular group from the 1970s provided entertainment. It was a stockings lover’s paradise! All of the women wore dresses, many with elegant and ornate slips. A few wore crinoline petticoats (which were really 1950s and 1960s lingerie… but who cared?) and almost all wore stockings. Almost all of the garterbelts were unfortunately the four-strap, plastic tab, bedroom variety but that’s OK. It was probably all they could locate in the local retailers.

Most of you will remember that pantyhose had already displaced stockings by the 1970s but stockings and garterbelts were still widely available, at least in many parts of the US, at the time. Many young women of the era still chose to wear stockings at the disco simply because they knew they would be twirling their skirts and displaying a lot of leg. These were very smart women!

My wife’s invitations for last night’s event specifically mentioned gartered stockings as suggested dress for women and almost all followed suit. I spoke to many younger husbands and dates last night who saw their wives and girlfriends in gartered hose for the first time. They were thrilled. So were the women. One fellow told me with a wink that they almost didn’t make it to the dance when he saw his 30 something wife in stockings for the first time in his life. Another older gentleman told me his wife had not worn stockings since the birth of their youngest child who is now a college senior. This man said that seeing her in a pair of tan FFs last night was better than Viagra and he intended to take full advantage of the situation. His wife giggled like a newlywed.

Ironically, both men and women spent more time looking at and commenting about women’s legs than when these same women are in bathing suits or bare legged. It just goes to show the power of stockings to attract attention and make a lasting impression.

I am very used to having my wife as the only woman in the room wearing stockings. And, I wondered if, with so many women wearing stockings last night, stockings might lose a little of their uniqueness. They did not. It seems that whether a woman has full legs, thin legs, disproportionately shaped legs or even somewhat unattractive legs, gartered stockings improved their appearance ten-fold. I spent time admiring the legs and thighs of women I had seen hundreds of times before in bathing suits, in pantyhose or bare-legged without taking a second look. One man remarked that he had never noticed how good his wife’s legs looked.

With all the dancing a couple of women needed repair work done as their plastic tabbed garters came loose. There was no shortage of volunteers among the men to re-fasten stockings. Husbands and dates had first priority for this “job” but as the evening wore on the man kneeling in front of the raised skirt more often than not turned out to be the man who got there first. The women loved this attention as much as the men loved giving it. A few women raised their skirts much higher than required to re-fasten a garter! Teasing seemed to come naturally to a woman in stockings.

The party broke up early this morning with some women promising their husbands and dates that this would not be the last time they wore stockings. We’ll see. One must put in an effort these days to find good stockings and garterbelts here in the US. My wife advised many women who complained of stockings becoming unhooked that a good, metal tabbed garterbelt would solve that problem. Many women said they would be calling to get a list of her suppliers.

We have spoken here many times of the power of the media to create a fashion trend. Disco came to the US from Europe. Do you all on the other side of the pond see any hot trend there now that could revive stockings here?

Cause for suspicion: a wife’s sudden love of stockings
previous post