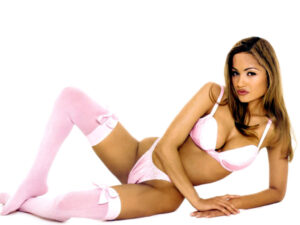 She appeared on the cover of Playboy’s Book of Lingerie in the March/April 1996 issue. She has since appeared on more than twelve Playboy Special Edition covers. She has also been featured in British lad mags FHM andLoaded.

Outside of the modeling realm, Baggett has worked on television as a WWF Sunday Night Heat commentator on the USA Network and has appeared on Penn and Teller’s Sin City Spectacular, the WB’s Unhappily Ever After, Telemundo’s The Umberto Show and the Maria Conchita Alonso Show. She has also performed in music videos for Ricky Martin’s “Shake Your Bon-Bon” and Third Eye Blind’s “Never Let You Go”. Baggett was featured in acomic book series based on a crime fighting alter-ego, “Alley Cat”. She has also appeared in various car tuning magazines.