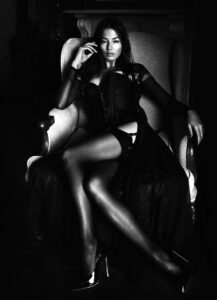 – During a visit to Pittsburgh last week, I stopped in a Starbucks in the village near my first home. A young lady in her mid 20s asked if she could sit in an empty chair next to the table where I was sitting. She indicated her husband would join her, and she asked if he could occupy the third seat at the table.

Her appearance was striking. She was at least 5’10”, and dressed in a white silk dress EXACTLY like Natalie Wood wore in the ’60s classic, Splendor in the Grass. She wore a white hat, white silk gloves, tan FF point heel stockings, and white sling-back pumps with 3-inch heels.

While she was very feminine, and her hair and make up meticulous, her facial features were average. When her husband introduced himself, I recognised him as a member of Pittsburgh’s best-known sports team. They were headed to a wedding close by, but arrived early.

He brought up a newspaper article about the dating and mating habits of US college students that he and a few other players had discussed on the return flight from Atlanta the night before.

He cited statistics in the article that showed less than one of three current college co-eds had as many as six dates during four years of college. The article stated an even larger percentage of college women had experienced at least a dozen one-night “hook ups” where the guy never called back to see the co-ed again.

Looking at his wife, he said that she needed to put together her seminar on the power of stockings in keeping a man interested. He then went on to detail how she got his attention in college when he saw her in a library, and kept his attention for six months before giving in to his advances.

His wife mentioned she looked much like Popeye’s Olive Oil in glasses, until she discovered stockings, garter belts, and contacts in her freshman year. She teased her husband about how she cast a spell on him, and kept his advances at bay for six months while much more beautiful campus queens were chasing him.

He confessed he didn’t forsake the campus queens until he caught her, and then detailed how she had refused to marry him for more than a year after he signed a lucrative pro football contract. She wanted them both to be sure he could stand to the temptations he would face, and didn’t marry him until he completed two seasons.

They both admitted her powers over him are so well known among his team-mates. His nickname is P-Whipped. They told me several wives on the team asked for her fashion advice – seeking to influence their husbands.

Then he looked at me, and said, “Don’t get me wrong about her influence. She’s my best friend. She was my best friend before we were intimate. Our relationship is much more than the stockings she wears. Our friendship keeps my emotional attention focused on her, but stockings showcase her feminine charms so powerfully that they keep my physical attention focused on her.”

He then said it was too bad college girls mentioned in the article are so out of touch with feminine potential, and so out of control of their emotional needs.

– I really loved your story, and am amazed by the self assurance of this young couple. They both seem like they have good sense. And she is a clever gal to keep him at arm’s length like she did, until both of them felt right about things. It’s a shame that that sense of power which all women possess is short shrift. It continually gets overshadowed by the “unfairness” aspect that women have to be the responsible ones and the dutiful ones when it comes to managing a relationship. We forget that the end result is that much sweeter for having used those tactics. It’s clearly evidenced in how this young man seemed to treat his wife while in your presence.

And as much as his team-mates rag him about his relationship with his wife (it’s not P-whipped in my opinion, just simple courtesy) I’m sure there’s a level of jealousy to it.

I know that my husband jokes about this with his guy friends – since they all readily admit to being in the same boat, and pretty happy about it, too! LOL

– Your comments about relationships and the ragging hit home. I suspect I saw in this couple things important to me.

This couple seemed to have clearly found congruency. She loved dressing up to please him, and he loved making her feel secure and emotionally satisfied.

He is a very visible athlete that was less than 14 hours removed from the season’s first game, but he didn’t allow the conversation to centre on him – or the football game. Every opportunity he had, he moved the conversation to his wife – or about his wife.

They talked about the article’s depiction of pain in campus relationships. He couldn’t accept the stupidity of current co-eds just “hooking up”. She felt mothers were encouraging daughters to compete with men, instead of teaching their daughters to succeed in relationships with men.

His football reputation is anything but Mr Goodie Twoshoes. He owns a rep as a mean man that enjoys inflicting pain on opponents, and a team-mate that will confront players on his team that leave anything on the field (play lazy).

What really got to me was how much they enjoyed each other. I commented about how they seemed to work hard to make each other happy. They told me it all started by a flash of a stockings top!