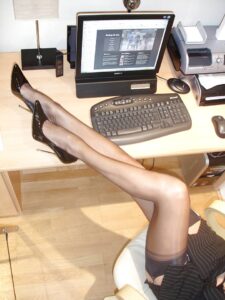 – There was a report on the radio last night, which was followed by a call-in radio show, about a new study that just came out regarding workplace productivity.

It seems that “casual Friday” and “dress down attire” are dismal failures for employers. Studies have now shown that the productivity in the workplace declined by as much as 25% on the days when dress standards were relaxed. To be clear, they compared the same days of the week (pre- and post-policy change) to get accurate statistics.

The study also showed that employees were showing up later for work on the casual days than they were for the standard office business attire days.

Finally, the study also detailed that employees took the “relaxed” standards too far – showing up in t-shirts, sneakers and shorts.

The host of the call-in show was all for a return to “proper attire” (her words) and so were many callers. The host went on to criticise the way her children’s teachers were NOT dressing in a manner that commanded respect and she felt that influenced young minds.

The host lamented the days when woman wore attractive outfits “… including stockings (she knew the distinction! )”. She blamed the blurring of the genders on the all-black outfits worn by females and was critical of the bare leg look in the work place.

Maybe there will soon to be a return to better dress codes in the workplace.

One caller owned a beauty parlour and she does not allow her beauticians to wear sneakers, jeans, etc – they are to dress as women, as their clientele come to the establishment with the goal to leave looking beautiful.

The move is on!

– I must agree, mostly from my own experience, that I feel less productive on those days when I wear jeans and a sweater to work rather than a nice dress and heels.

I finally got sick of looking like a grub all the time, and frankly feeling embarrassed on the subway, with people looking at me like I was some permanent student or someone on the dole. I went back to dressing more appropriately. I feel better, I get more done.

I think it’s a step in the right direction. Will we ever see a return to the old days? Definitely not. No one is going to put up with the rigid and ridiculous dress codes of the ’40s and ’50s. Believe me, when I go home I like to put on comfy clothes to hang out. I am not about to start sorting laundry looking like June Cleaver!

However, there’s nothing wrong with dressing properly when leaving the house and having some self-respect.

– Here’s one for you. Last week I was in the ladies’ hosiery section of a dept store buying for a woman. The sales clerk, friendly enough if seemingly a little embarrassed to be serving me, a man, was dressed in scrubby blue jeans and a top. I couldn’t believe this was a floor clerk in a national dept store chain. And it wasn’t even Friday! And in the hosiery section no less. It made me wonder if she ever wore nylons and knew what she was talking about.

– Amen! I was at Nordstrom’s yesterday and was appalled to see a sales clerk (female) with those hip-hugging black pants and a short top where I could clearly see the small of her back (almost the crack of the moon too) along with one of those tattoos that resembles scroll work. Sadder still was another young sales clerk (also female) who was crouching to check stock in a low drawer and I got a glimpse of the waistband of her pantyhose! GASP!

We were just lamenting this topic (dress down and casual days in the workplace) and I for one, am looking forward to a return to dressing in more ‘business attire’.

First off, it does look better and I feel that people behave in a more professional manner. Also, I usually have my suits (god, I love Italian suits!) tailored, which makes anything look better. And finally, it reminds me as to when I’m packing a few too many calories! Subtle reinforcement!

I welcome the move back. . and if there are more stocking sightings. . so much the better!

– Somehow I feel that this problem goes deeper than a simple dress down policy. My employer does not have a dress down policy at all, yet female dress standards at my firm have declined dramatically in the last few years. For men, things remain very much unchanged, suit, collar and tie, but women seem to be able to get away with wearing just about anything. The reason is obvious – political correctness has left employers terrified to tell female employees what they should wear, lest they be accused of sexism. The result is that many females now feel that they have carte blanche to wear what the hell they want to work. You may not have liked the old days when women were not allowed to wear trousers to work, but in my view it did at least set very clear dress standards, something that is now sadly lacking.

– When I first met my wife in the late ’60s in Brisbane Australia, she would always wear (or carry) gloves as well as hosiery when going to work. Now you must realise that Brisbane is a sub-tropical city and at that time a very conservative one too and the very feminine dress code in the city was most delightful if a little impractical. (Believe me, holding a kid-skin gloved hand is one of my most treasured memories, does anyone else share this feeling?)

At that stage she had just changed over to the new fangled pantyhose which her sister had sent her from London with the advice that pantyhose are hottest item there! At that time she was grateful as the skirts were soaring to great heights, but she still liked stockings.

She has always dressed to the nines when going to work and even when she started a family and became a Mary Kaye cosmetics consultant to keep active for those years, the dress code for conducting her in-home demonstrations always included sheer hose. (That decree I believe, came from the parent company in the US.)

Back in full time work for the past 15 years has seen her get promotions on a regular basis, but nine months ago she started for the first time forgoing sheer hosiery at work and almost immediately noticed that she wasn’t getting the right sort of attention (as in getting the better assignments). She then took up a job in another department, and went back to dressing up and has found that in just a couple of months her prospects of promotion have greatly increased.

However, she went along with a dress down Friday (actually only held on the last Friday of the month), but said never again, because, as she put it, she lost the psychological advantage she had over the others in the department.