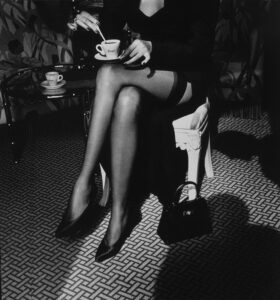 This last weekend was a bit cool in the Laurel Highlands so my wife and I motored into the city (where its usually 5 to 10 degrees warmer) to visit some friends and go to the museum.

She wore black: black dress, black hat, black strappy shoes, black stockings, black garterbelt and black slip, black bra and, of course, black split-crotch (her favorite style) panties. She also carried a small black clutch bag. Everything was black except for her pearls and a silver and pearl brooch. I told her she looked like a Mafia widow.

I prefer religious art of the 14th, 15th and 16th centuries and my wife likes just about everything so it is often our custom to split up at the museum. She will find a room she likes and park on a bench. I will wander all over and eventually work my way back to her. If we get lost we use our cell phones to relocate each other.

After about an hour my phone vibrated and I answered. My wife told me where she was and said that she was sure she had become part of the exhibit. It seems that a gentleman had wandered into the room where she was sitting and had, for the last ten minutes, been studying a sculpture that was directly between her and him. She was sure he was looking at her and she wanted me to drop by, not because she was frightened, but because she was about to test her theory. I had started moving towards her room as soon as she told me where he was and I managed to reach it in about three minutes, all the while carrying on a muted conversation with her.

I did not enter the room but rather held back a bit at the entrance. I was behind the man and he and the sculpture were between my wife and me. She was sitting with the clutch on her lap, knees properly pressed together, head down speaking to me on the phone. I told her where I was. It was impossible for him not to see her. He was standing right across from her.

My wife is a notorious tease so I knew what was about to happen. “Watch this, ” she told me and with that she disconnected. I saw her fold the small phone in half and put it into her handbag. The man did not move. She looked left and right and then at her watch as though she were waiting for someone and then reached for a museum brochure that was next to her on the bench. She opened the brochure and began reading it intensely. Then she crossed her right leg over her left revealing the top of her stockings, the lace hem of her black slip, several inches of thigh and a good bit of garter strap. Our anonymous friend dropped his museum guide and quickly retrieved it from the floor. While he was down there I saw him attempt to better his view from the low angle.

I moved into the room and within a few seconds I was standing almost next to the audience of one. He was so engrossed in studying the view that he didn’t notice me.

“Good afternoon,” I said, greeting him. I had startled him but he quickly recovered. “Hello,” he answered. For a moment we both stood facing my wife with the sculpture between us and her. When two men stand anywhere near a beautiful woman it is not long before one of them mentions the obvious and he spoke first.

“Quite a work of art, wouldn’t you say?” It was clear he did not man the sculpture.

I smiled, “Yes, just beautiful,” I said. Then we both smiled knowingly in the way men smile at each other when they both appreciate the sight of the same beautiful woman. With that my wife, who had been sneaking looks at us over her brochure, uncrossed her legs again this time with her knees left slightly apart. Our line of sight led up between her legs past the tops of her stockings and into a lovely, forbidden darkness.

There was a moment of silence as we both stood in transfixed by her beauty.

Then my wife reached into her clutch and extracted the cell phone. In a second my phone began vibrating. “Yes dear,” I answered, “Yes, we can go now,” I said.

With that I folded my phone. She folded hers and rose. I said goodbye to my friend and together she and I walked out of the room. My wife looked back at him and smiled. She said he was in a state of shock. Ah, the wonderful power of stockings.

A stocking conversation with an elegant lady
previous post