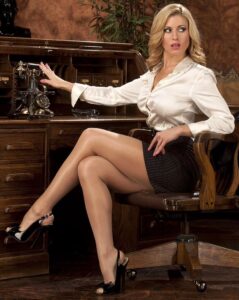 The company outlined its goal of maintaining a professional, harassment-free work environment. The communication referenced studies that correlate professional attire to professional behaviour. Yesterday’s Atlanta Journal-Constitution reported on a study that correlated increased work-place harassment and vulgar behaviour as ugly side effects of the casual movement.

June was a good month for stockings fans with significant pop culture exposure, increased references to stockings in upscale advertising, and the “banning” of bare legs in the dress code of one of the world’s most visible corporations. June was a bad month for “femin-odd-skies” that seek a unisex society.

– Way to go! Thanks for keeping us all in the know! Can we begin to see a solid backlash against all things ultra casual now?

– It’s good to see and hear that companies are banning bare legs, in a professional setting. Many of the Fortune 500 companies are into professional attire for ladies and men. Hopefully the new focus on stockings in pop culture will encourage the new trend towards stockings and it will catch on. We can only hope.

One last comment, teachers are also encouraged to wear professional dress, but state mainly that that means no jeans, cut-offs, shorts, or tube tops, or open toed shoes. The banning of open toed shoes is because of the heavy doors in most classrooms and the fact that children tend to open them without regard to what is on the other side and there have been foot injuries due to this.

– I applaud UPS. I’m hoping this is start of a trend. On a few occasions lately I’ve started to think we may have reached the trough of the casual movement. That things have gone too far and we’re due for a swing towards more formal attire or at least a certain standard of decorum that seems to have flown out the window in the mad rush to dressing down… It is truly amazing how casual has totally taken over: nurses now wear pantsuits and running shoes and socks, teachers T-shirts and jeans, and many workplaces have eschewed formal attire five days a week. And in public, forget it! People dress for dinner and theatre like they’re heading to their rec rooms. They dine in fine hotels in sweat-suits oblivious to the elegant surroundings and formally-attired wait staff. It’s also ironic that in a world that places so much emphasis on “upscale” services and products – gourmet dining, fine-crafted houses and apartments, home renovations (Martha Stewart, etc.), frilly hotels and even first class airline service, when it comes to personal dress the world has descended en masse into slobs. Yet no one – except for a very few of us – take notice, so overwhelming has this sartorial phenomenon taken place.

– Good news… sort of. The only problem is that won’t this restriction simply lead to more female employees wearing trousers? – There are two major multinational companies based here in Chicago that officially do not permit bare legs for their female employees: Arthur Andersen and Accenture (formerly known as Andersen Consulting). I knew about AA because a good friend of mine worked there and told me what it was like. I recently met a young woman who works for Accenture and I casually brought up the subject of hosiery. She then mentioned that in their employee handbook, it clearly stated that bare legs were not allowed and that nylon hosiery had to be worn at all times even under slacks. (It didn’t specify if it had to be sheer or not).

Does anyone know of any other companies where wearing nylons is compulsory (other than Hooters of course!)

– Perhaps there is a connection between quality, high professional standards, and stockings. In addition to AA, Accenture and UPS, CRM Software giant, Siebel, requires sheer hosiery as part of its dress code.

Is it not ironic that these four firms are able to attract the best and brightest people, and command the highest fees in their respective businesses?