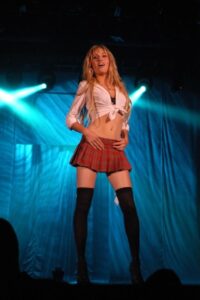 Haislip is a native of Tewksbury Township, New Jersey and graduate of Voorhees High School. She graduated with honours from Boston College, having studied theater. She also trained at the British American Drama Academy. Afterwards, she moved to Los Angeles to pursue an acting career.

Haislip landed at G4 in October 2007 after being told by a G4 employee, who was a patron where she worked as a bartender, that she would be a great fit at the network. Haislip hosted “The Feed” segment and did correspondent work numerous times for Attack of the Show! before being hired full-time around Spring 2008. She often substituted the show’s co-host position of Olivia Munn. For most of 2010, in addition to her pre-filmed segments and occasional guest hosting, she also shared responsibility for presenting “The Feed” with Blair Herter, typically anchoring it live on two of the four days that Attack of the Show! aired per week.

On November 7, 2011, Haislip announced during a hosting appearance on Attack of the Show! that she was leaving G4.
From May 2008 to February 2009, Haislip hosted a weekly podcast ranging in length from two to five minutes for G4’s website. Tech News went on indefinite hiatus as a part of the network’s financial cutbacks.
Haislip and Blair Herter co-hosted the first season of American Ninja Warrior. Haislip was the sideline reporter for the second and third season.