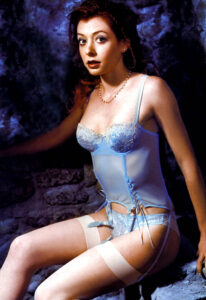 In 1997, Hannigan was cast to play Willow Rosenberg, Buffy Summers’ best friend, on the television series Buffy the Vampire Slayer. The show became a success, and Hannigan gained recognition, subsequently appearing in several films aimed at teenage audiences, including American Pie, American Pie 2, Boys and Girls and American Wedding. She also had a guest spot on the Buffy spin-off, Angel, reprising her role of Willow in a few episodes (including most notably “Orpheus,” during the fourth season of Angeland the seventh season of Buffy), but none after Buffy finished production.

In early 2004, Hannigan made her West End debut, starring in a stage adaptation of When Harry Met Sally… at the Theatre Royal Haymarket, opposite Luke Perry. In 2005, Hannigan returned to starring in a regular television series, appearing in the hit comedyHow I Met Your Mother as Lily, and also playing a recurring guest role on Veronica Mars as Trina Echolls. In February 2006, Hannigan starred as Julia Jones in Date Movie, a parody of romantic comedies. She was also a guest star on the ABC animated sitcomThe Goode Family in 2009.

In 2012, Hannigan reprised the role of Michelle in American Reunion.