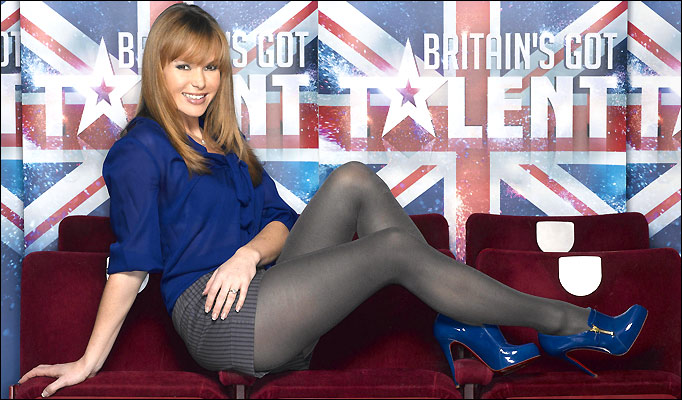 Amanda Louise Holden (born 16 February 1971) is an English actress, singer and presenter, best known as a judge on ITV’s Britain’s Got Talent since the show began in 2007.

Holden played the role of Sarah Trevanion in Wild at Heart (2006–2008) and the title role in Thoroughly Modern Millie, for which she was nominated for a Laurence Olivier Theatre Award. More recently she has presented various television shows for ITV including Superstar (2012), This Morning (2014–present) and Give a Pet a Home (2015).

Holden’s first television appearance was as a contestant on game show Blind Date in 1991.

From 2006 to 2008, Holden appeared as Sarah Trevanian in three series of ITV’s Wild at Heart co-starring Stephen Tompkinson.

Holden’s other TV credits include three series of the comedy Kiss Me Kate with Caroline Quentin and Chris Langham, three series of the ITV’s The Grimleys, Celeb with Harry Enfield, BBC series Hearts and Bones withDamian Lewis, the Jonathan Creek episode “The Problem at Gallowes Gate” and a Boxing Day special Marple opposite Geraldine McEwan and John Hannah. She also co-starred with Bill Nighy and Tom Courtenay inReady When You Are, Mr McGill, Jack Rosenthal’s comedy drama.

Holden is currently a judge on Britain’s Got Talent along with Simon Cowell, David Walliams and Alesha Dixon. She joined the show in 2007.

She has appeared on various British series such as Smack the Pony, EastEnders, Hearts and Bones, Cutting It and with Harry Enfield in comedy series Celeb.

In 2009, Holden appeared as Lizzie, the Ring Mistress in the BBC sitcom Big Top. In April 2009, it was reported that the US network CBS had offered Holden the job of one-time guest presenter on The Early Show, a daytime talk show. On 1 June 2009, she appeared with regular presenters Harry Smith and Maggie Rodriguez. Holden has since signed up with CBS as a British correspondent for The Early Show.

Since 2009, Holden has co-presented A Night of Heroes: The Sun Military Awards annually on ITV with Phillip Schofield. In January 2010, she presented her own three-part series on ITV, Amanda Holden’s Fantasy Lives.

In 2010, Holden co-presented The Door with Chris Tarrant. In 2011, Holden narrated the documentary The Nation’s Favourite Bee Gees Song on ITV and on 6 July 2012, she guest presented Lorraine.

In 2012, Holden presented talent show Superstar on ITV. On 24 March 2014, she hosted an episode of the Channel 4 show Dispatches about the treatment for stillbirths and miscarriages.

From 22 September to 18 December 2014, Holden filled in as a co-host on This Morning with Phillip Schofield during Holly Willoughby’s maternity leave. She took a short break in January and February 2015 to record theBritain’s Got Talent auditions before returning to the show on 2 March 2015.

Amanda presented a six-part factual series for ITV called Give a Pet a Home which worked alongside the RSPCA finding homes for animals. The series aired in April and May 2015