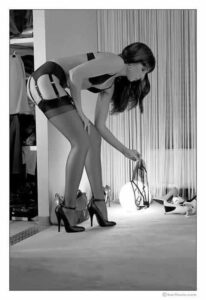 A lady friend and I were discussing stockings (what else?) recently and she said that she began wearing them only because her boyfriend at the time suggested it. She and the boyfriend parted years ago but she says she wears stockings about three times a week and almost always on dates.

It got me to wondering about the women reading and posting here. Dear ladies; did you begin wearing stockings because someone else suggested it or did you develop an interest yourself and then begin wearing them quite independently from anyone’s suggestion? Thank you in advance for your responses.

– I started wearing stockings when I was about16/17. Tights kept giving me thrush and I have not worn them since. I only ever wear stockings/hold-ups and it has been that way for 20 years now!

– I began wearing stockings after seeing the idea in a book that “stockings and a garterbelt are always more sexy than pantyhose“. At first I totally rejected the idea and put the book away. But in October of 2000, I began looking for ways to improve my marriage to my husband to kind of liven things up in the sex department. So I started very hesitantly at first wearing stockings with lycra in them and made the usual mistakes of trying to get what the stores offered. In the USA good quality stockings are almost impossible to get in the shopping malls.

Through this forum I discovered all I needed to know about wearing stockings, including which ones were best for me, and which manufacturer to get them from, plus where to get the best garter belts and what type were the most comfortable for me. So now I wear them mostly for myself, but also I wear them for my husband.

– I wore them as a young girl in high school but then pantyhose became the rage. I didn’t wear them again until I met my husband. While we were dating he constantly bought me clothes. He likes to dress me as though I were his own personal doll. At first I felt awkward but I also enjoyed the compliments the clothes he bought for me were attracting. Also, he was (and is) very generous and has excellent taste. So, I ended up with a wardrobe I never would have purchased for myself.

He got me back into stockings. He hates women wearing pantyhose and I think if the inventor of them isn’t already dead he would surely hunt him down. At first I wore them only because he wanted me to and he bought tons and tons of them. Even if I wanted to wear pantyhose I’d be hard pressed to find a single pair in any of our three residences.

Now I wear stockings because I genuinely like them and the effect they have on him and every other man I know. I am completely faithful to my husband but I love to tease. Sometimes my teasing distresses my husband but I tell him it’s his fault. If I were in pantyhose no one would be looking.

– I had always thought of stockings and garterbelts, as well as girdles and corsets as part of the wonderful world of femininity. Although I never wore them as a girl or young woman, I always kept the idea of them in the back of my mind.

Not long after I met my now-husband, we went on an expedition through every major department store in Boston. Every lingerie sales person looked at me as if I had three heads! They couldn’t believe I was asking for stockings, let alone silk stockings! My boyfriend encouraged me to continue my quest – not to satisfy a need on his part, but rather because he somehow knew I would be happier in them.

To make a long story short, I finally got fed up with pantyhose, and decided to make the change. Thanks to some intrepid web surfing, I discovered this site which helped me to make the permanent shift to stockings. I wear them almost every day, much to the delight of my husband. They have given me a level of confidence and pride in my appearance than I didn’t have before. And a little harmless stocking flirting is a great side benefit!