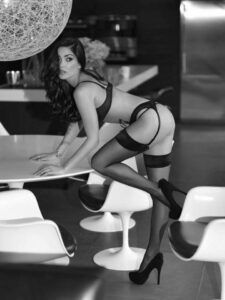 My wife and I were out to dinner with a small group (four couples) last week when one of the ladies remarked to her husband that since my wife wears stockings instead of pantyhose wouldn’t he (her husband) just love to see her (his wife, the speaker) in stockings all the time too. All of our friends are aware that my wife is a stockings wearer and anyone who is the least bit observant will soon see that she does.

It was one of those “you had to be there” moments. The tone this women employed when asking the question was not inquisitive – it was catty and sarcastic. She seemed to know that her husband would much prefer her in stockings and as the table conversation progressed it became obvious that this couple had discussed this topic before. It also became obvious that the wife had no intention of wearing stockings for her husband or anyone else for that matter and it seemed that she only brought up this issue in an effort to embarrass both her husband and my wife.

She failed on both fronts. My wife is a fierce defender of stockings and not the least bit shy. She immediately picked up the other woman’s tone and called her out.

There was a very awkward silence and then the woman’s husband said “maybe if this marriage had been a little more about us and a little less about you we’d still have a marriage. Maybe if you’d have thought just once of listening to my needs instead of telling me constantly about yours we’d have made it. And maybe, just maybe, if you’d bought a pair of stockings we’d still have a sex life.” With that, he left. For good. Their relationship has been in trouble for some time.

– If indeed the story is true, then I’d say that you are a very fortunate man to have such a strong and decent woman by your side. I have come across the same attitude in some women who feel that women’s lib is some kind of reason to de-sexualise themselves. It’s a shame that this particular women couldn’t accept the situation… much less keep her big mouth shut…

– Wow – a good story for these “postmodern” times. Unfortunately many “modern” women hold these views (just check out the Vogue forum). It is indeed unfortunate that these women can’t “get over” equating sexy, feminine and classy garments with oppression. I also think men should turn the tables: if your woman wanted you to dress in a certain way, some or all the time, would you? If she wanted you to wear nice clothes, ties and suits, would you? It’s a reciprocal thing. And since I believe in equality, I have and would. I also happen to think it’s a lot sexier to be well-dressed. The way I see it, our modern society has equated dressing well with dehumanisation, or it simply doesn’t care (which raises other interesting questions). But, for me, in one respect the overwhelming trend these days to dress badly and look slovenly equates with a mass “desexualisation” of society. And being a man, all I can say is that not very many women look sexy anymore.

– True or not true, there is a conclusion to be drawn. Wanton, extreme feminists are a problem for both sexes, since they are trying to force their views onto everyone else. In the end, they become statistics and first class “non achievers” of this world with no meaningful relationship (in the old fashioned sense) to show. I am happy to feel feminine as much as most guys are happy to feel masculine, and if I choose to be feminine in the way I dress, then it is my business.

– It’s telling that this marriage was the woman’s third, and she still couldn’t get it right. There’s one thing everyone in a relationship (and marriage too) should remember: pick your battles! Save it for the squabbles over that heinous design of wallpaper for the bathroom, or whether your dreaded mother in law is going to live with you!

This is what the feminist liberation movement has done to all of us – turned every innocent gesture like pleasing your husband (or yourself, for that matter) into a sexualised power grab. And frankly, what woman among us wouldn’t admit that being thought an object in that sense is all that bad? I don’t mean a steady diet, but a little to keep the magic.

If we keep this up, we’re all going to be wearing identical Chairman Mao like garments, chattering away on the evils of western society!