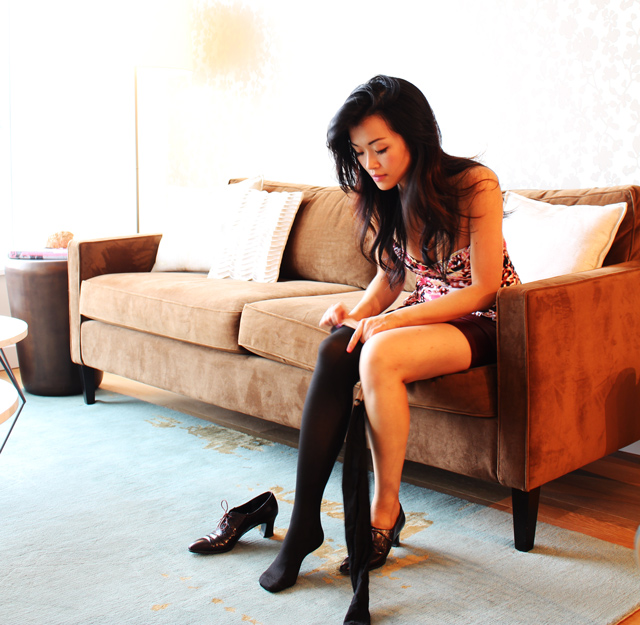 Before I got married, my now eight year old niece used to stay with me regularly at weekends. She would often come in and out of my bedroom and talk about clothes, make-up, etc.

Since hubby and I were going to a party after returning my niece home last night, I thought I would wear some finery underneath as well as on top. As chance would have it, Ashley walked into my bedroom as I was attaching my first stocking to my suspender belt. She wanted to know why I was wearing such a strange thing and not ordinary tights. The only answer I could think of was that married women wear them, but obviously she has not seen them on her mother. How has anyone else tried to explain stockings to children?

– Maybe something like this… women wear stockings when they want to look nice and on special occasions. You’ll understand when you’re a young woman.

– I have a little girl of eight years old who is not my daughter, but she and her mom are living with us temporarily. Well I had a very similar event to the one you are describing, the little girl whom I’ll call Tiffany, came into my bedroom one day when I was putting on my stockings, and gartering them up. She just asked ‘what are you doing?’ And I told her putting on my stockings. She asked if she could touch one, so I took one out of my dresser drawer and let her feel it and I told her how soft they were and how delicate they were.

She had seen the stockings that I purchased from Ebay and Magnolia Hosiery arrive in the mail in special Priority Mail packages and she of course asked what was in the package. I told her stockings, and she wanted to see them, so I showed them to her in the package. She has since that time come into my room many times when I am getting ready for church and am putting on my stockings and gartering them up and watched me. One day I was refolding some 30 denier stockings to put into the package preparing to sell them and she asked if she could try one on, I let her, but when she wanted to wear them to church I had to say no, that she would have to wait until she is older.

I have given her my old lace tights and some odd coloured tights, and I bought a few dresses at a thrift store in her size and she likes wearing them to church. That is how I handled her questions, and I’m sure she will have more as time goes on. I didn’t want to discourage her interest, but also being only eight I felt she was too young for a full explanation. I hope that helps.

The easiest solution would be to shut and bolt the door if the child is inquisitive. After all you would not want them to come rushing into the bathroom whilst you were in your birthday suit!

How deep should you attach suspenders?