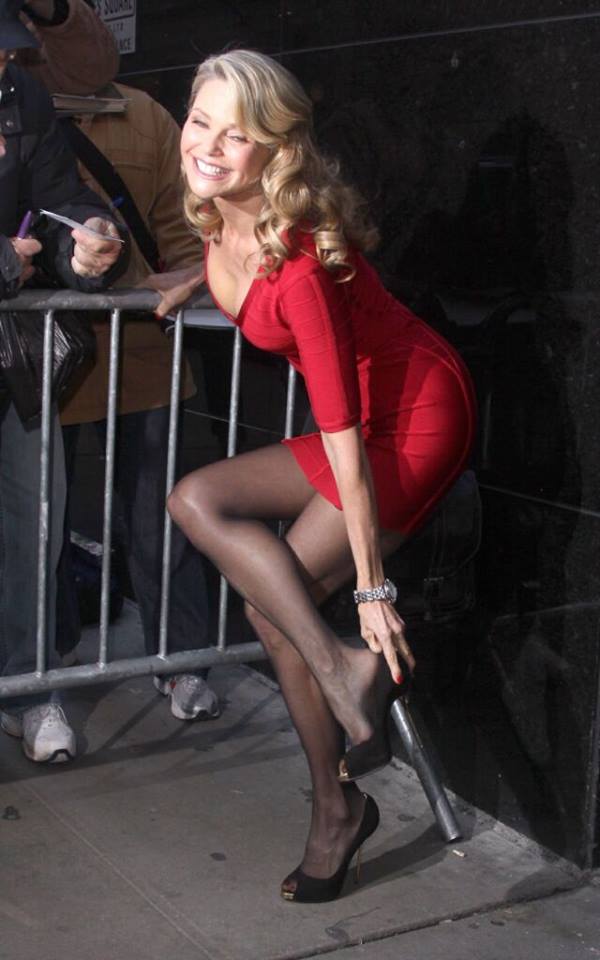 “I like what you say about the extra attention your husband gives you when you wear stockings – ‘When I wear stockings, I have control of this big, aggressive, self-assured man.’ And also that you feel confident when ‘dressed elegantly’ Those are both positive things.

“Your excellent point about ‘Hollywood’s depiction of sluts wearing stockings’ and that there ‘aren’t visible role models wearing stockings to give US women confidence to challenge their fears’ are also very interesting comments, and points that as a man I am most conscious of.

“I have often wondered how the wearing of stockings could be made to look more glamorous, sophisticated (and feminine certainly), but also more intelligent. And I, like you, wonder where or whether we may ever see such a role model for modern women. In a slight way Madonna tried, but she is far too controversial to fulfil that kind of role. What we need is a successful model like a Hilary Clinton (I mean someone with respect who really does) or maybe one of the big Paris houses to hire one such as I don’t know, say an Elizabeth Hurley, to make stockings appealing and attractive. Maybe it’s a matter of marketing, but you have hit on a problem we need to address.”

“In the UK, we did have a cabinet minister, Edwina Currie, who liked wearing stockings, and a television personality, Esther Rantzen, who was even seen to make the occasional accidental flash on television. Funny thing is both ladies are Jewish, although that is not relevant (makes me wonder about synagogue though).

“Anyway, I appreciate your point and think you’re right, the whole thing needs to be presented in a positive way to get rid of old taboos, connotations and innuendo. After all we’re now entering the first year of the new millennium!”

“From the real-life experiences posted on this suite, it’s rather obvious that the ‘world out there’ (ie. people who may not be as preoccupied with nylons as us stocking-lovers) seems to find stockings – when they periodically get a glimpse of them, alluring. So, I ask, why is it that stockings still aren’t much of a fashion statement? Why, in movie advertising, or in celebrity pics, or even in what passes for ‘sexy model’ photos, do we not see more wearing of stockings, and particularly the extraordinary lustrous FFs? In the final analysis, why is the world so “dumb” when it comes to this incredible fashion garment?”

“The current vogue for scrawny, bare legged models is very tedious in my view. My god, I even remember a cover for a standard woman’s magazine, Woman’s Own, I think, in the 60s, which showed a close up shot of a woman raising her dress to show her stocking tops. Everything is kind of bland now, I feel. Even models in tights would be preferable. Much sexier than bare legs.”

“What baffles me most is why so many women spend so much money to impress men with push-up bras and dangerous implant operations, when they could “own” us by donning stockings. The comfort argument doesn’t balance when implant operations have to be painful. Why be sexy on the upper half of the body, and gross men out with bare legs.”

“Female associates in business often ask me why can’t they get the commitments they seek from their male lovers? Frequently, I’ll suggest a visit a lingerie store and purchase of 100 percent nylon stockings. I gave stockings as gifts to female associates that repeatedly sought my counsel on their relationships. I stopped because a female in-house attorney warned me giving stockings could get me fired for sexual misconduct.

“However, she accepted my gift in the spirit of the intended influence on her frustration. Her three-year going nowhere relationship turned into marriage eight months later. Modern women don’t understand the power of their feminine charms, and don’t seem to know how to deploy their feminine assets.”