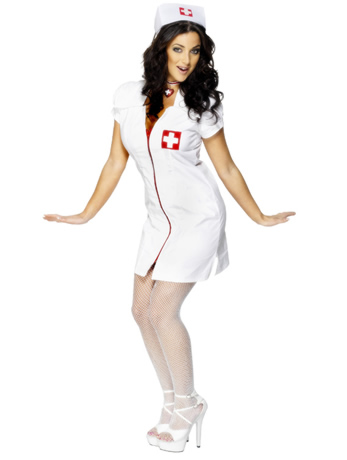 “I am a nurse and when I started my training I wore both opaque and 20 denier tights and found them both hot to wear and uncomfortable so I started to wear stockings and have continued to do so since. The uniform in the hospital were I previously worked was white and a memo was sent out requesting nurses to wear underskirts (slips) under their dresses as their underwear could be seen. The main problem was black tights and underwear. As white was the only colour underskirt that could be worn then only white underwear could be worn so black tights or stockings were a no no.”

“New uniform code states no more thick opaque black tights to be worn with our uniform because we wear a white uniform black tights clash. We now have to wear sheer tan/light orange colour…This is good news for a lot of us as opaque tights were too hot, however a lot of the girls want to bring back the black tights.”

“I’m 51 and still nursing after many years. I’ve worn stockings and suspenders all my life and still wear them when on duty. I know several other girls that wear stockings to work. Our uniforms are nowhere near as glamorous as they used to be when I started in 1970, but wearing stockings both gives my appearance a lift (I’m still proud of my pins) and has practical value (hygiene, etc). So we are around!”

“I have been nursing for 10 years and always wear black stockings and suspenders with my uniform. I saw a posting a while back stating that English nurses are banned from wearing black hosiery. This isn’t true for all, it just depends which NHS trust you work for. All seem to have a different idea of uniform standards. Also, what about the private nursing sector?”

“Nothing will convince me that (a) there’s anything wrong with feminine dress whether it be nurses or any other professional (a lab coat in itself is not the point: it’s what’s worn beneath that I am writing about) and (b) that a smart uniform, which requires some effort in maintaining – such as ironing, etc., will not engender pride and efficiency in its wearer.

“I’m a professional – I COULD perform my work just as easily in a “T” shirt and jeans: I don’t think that my clients would care very much for it, though, nor the more senior professionals with whom I am in daily contact.

“And, in any event, what about the psychological boost that a well-dressed nurse will give her patients? I’m not writing about turning a nurse into an object of sexual fantasy, but simply the pleasure a man (or even a woman) gets from seeing a well-dressed woman. There’s more to nursing than simply being a medicine-dispenser or bed-changer.”

“I think we would all be surprised at how many women still wear stockings and suspenders as a matter of course. My girlfriend wears the above at least three days a week to work and has done for a number of years. What is more interesting is that she has told me of at least four of her friends who do the same. I have been looking at them in a somewhat different light since I found out their little ‘secret’.”

“In the 1960s I spent several years nursing. In those days the uniforms were a far cry from today’s shabby affairs and included black stockings and suspenders. The only problem was with the sheets and blankets being made of new-fangled man-made fibres, bri-nylon and the like. When we were making beds, or sometimes when we just touched them, we would often get a sharp electric shock, which we felt right on the metal clips of our suspenders!”

“I remember lying in a hospital bed recovering from an operation. I had been playfully teasing a young nurse when she decided to make the bed opposite. As she leaned over the bed I got a wonderful view of a black stocking top and about 2″ of the creamy white thigh above. Mmmm delicious! Maybe this is a therapeutic tactic? It certainly made my day and helped me on the road to rapid recovery!”

Keeping up stockings while wearing a pantygirdle
previous post