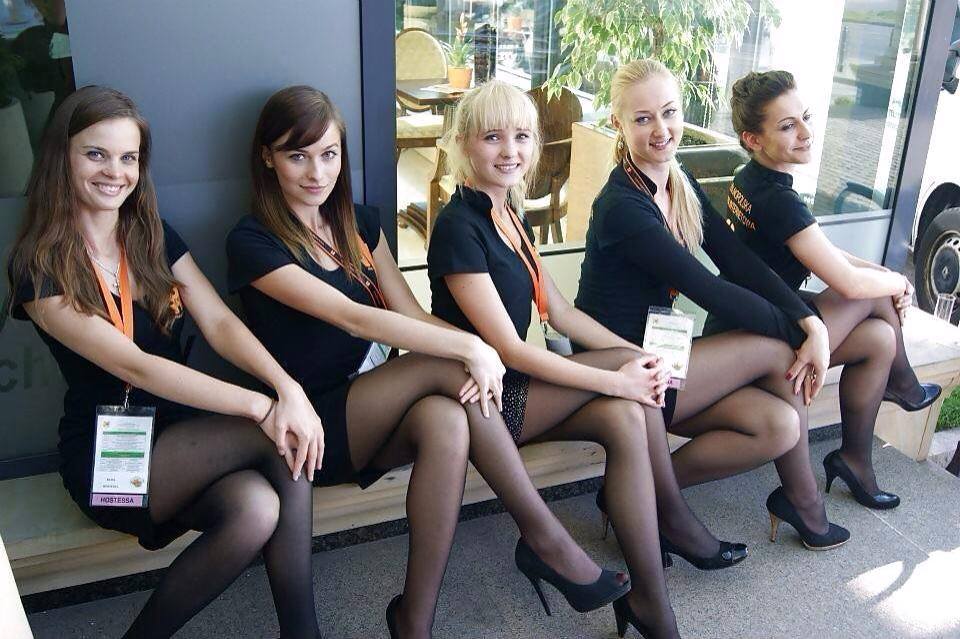 I just wanted to offer this bit of “wisdom” with respect to the debate on the erosion of femininity and the decline of skirts, etc.

I was in Poland with my girlfriend May (2000), and I found it very hard to concentrate. The difference between Canada and Poland was absolutely astounding. First of all, women are much more conscious of their bodies, at least women in the 18-35 range I suppose. Whereas here in North America obesity abounds, in Poland it seemed all but totally absent. In fact, it looked to me like almost every woman I saw was very physically fit, and I don’t mean necessarily the waifish starved bulimic look. I could tell that there was considerable muscular definition in their legs, and even a bit in their upper bodies. However, the balance that they seemed to strike was just perfect: they didn’t look like female bodybuilders, but much closer to aerobics instructors if that makes any sense.

One of the other things that struck me was how they dressed. I wasn’t just drawn to them (my eyes, I mean) because they were pretty, or fit, I was drawn to them because they (gasp) dressed in a very feminine fashion. I don’t mean they were particularly promiscuous or slutty. Certainly, many short skirts were to be found around town and on buses and the subway, but many people also wore above the knee skirts, or slightly longer even. The important point is that even though I was there in the summer, women wore skirts I’d say at least 80% of the time if not more. And, not knowing how to describe it, I’ll just say they looked really “sharp”. The words classy, elegant, and well-tailored also come to mind. That, coupled with the abundance of hosiery, and heeled shoes, made it impossible not to stare. 🙂 In fact hosiery seems to be an obsession in Poland, due to the fact that it was very difficult to get good quality hose under communism, apparently, and also because the women have such great legs. Every where I went, in the underpasses at the major intersections in downtown Warsaw, there were little booths/stores selling hosiery. From the very cheap, terrible kind that the old ladies wear, to really tacky ’80s style patterned tights, to the no-nonsense, sexy but practical businesswoman type, to really elegant, sheer, and expensive, it was all there, everywhere I looked: for sale, and of course on the women.

In Canada, and especially Toronto and Ottawa, this trend of defeminisation is quite apparent. In the summers, women very often go bare-legged, but I suspect it’s because it is simply more comfortable to wear skirts in the summer, since it is so hot and humid here. As soon as the fall starts, though, I see a lot more pants. Even though pants can sometimes accentuate the female figure, they’d have to come far behind skirts for that purpose. In the schools, it is even worse. In most universities, the order of the day is basically slobbish attire. I suppose it’s expected of men, since wearing elegant menswear was never really common until a man actually started working and making good money, but I suspect women in university did use to dress to attract some degree of male attention, depending on their intent.

However, it seems that their male counterparts simply don’t care anymore: a girl is a girl, who cares if she wears jeans and a t-shirt, as long as they can come off.

That’s what I suspect the attitude is. In fact, when I started reading this web site I began to really think for the first time about how often I actually see skirts, and I have to say, very, very, rarely. In the ’80s, as a boy, I used to see a lot more, but when pants actually became popular for women aged 18 and above I figure that all fell apart. And then it finally struck me. I had been wondering why I couldn’t keep my eyes off the women in Warsaw, but I had found my answer, and although it was a variety of factors, the simplest and most contributing factor was: skirts.

So I just wanted to say that femininity is definitely *NOT* in decline in Poland. I only wish that I could permanently move there, but I think I’d miss being able to speak English.

– I’m glad you noticed something like this. And it’s not the case only in Poland, also in Hungary, Czekia… in fact in all “former” socialist countries. In fact they were always more feminine looking, but the choice they had at that moment, made them looking pretty poor. But now, they have a chance to express the way they feel, and it’s really great. I had the same impression last year when I spent some time in Budapest. Those girls really have a cult of body (just to remind you that winners in fitness are Hungarian girls). In cafes, restaurants, on the streets, it’s really great looking at those good looking bodies.

You also noticed that girls in Poland wear stockings with open-toed sandals and shoes. It’s the same in Budapest. And I don’t find it bad-looking (of course, not all sandals and all stockings). It can look really great. Remember that this type of look was launched in the period when the femininity was growing – during the ’60s and ’70s.

One thing more – looking good is also a way of “selling” yourself. In the rich countries there is no need for that. But on the east, beautiful girls have much more chance to find a partner who will make their life easier.

It’s just the tip of the iceberg!
previous post