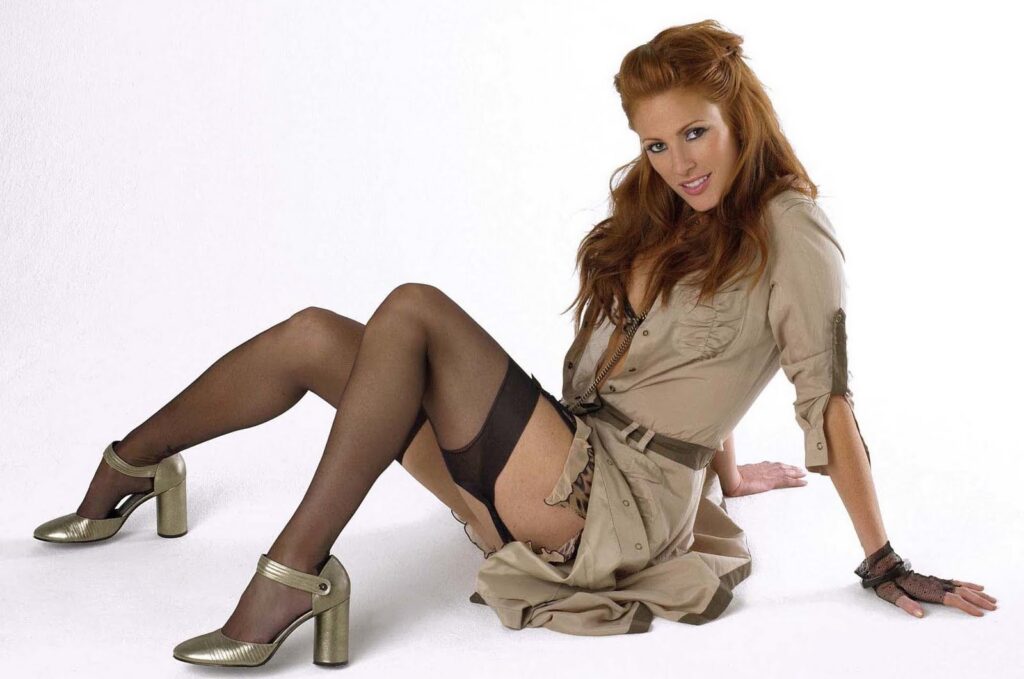 Angie Everhart was born on September 7, 1969 in Akron, Ohio, the daughter of homemaker Ginnie and engineer Bob Everhart
As a teen, Everhart became a cover model for such fashion magazines as Elle and Glamour. Following a riding accident in which she broke her back at the age of 19, Everhart eventually recovered through physical therapy. She appeared in several issues of the annual Sports Illustrated swimsuit edition, starting in 1995. Everhart posed nude for a cover-featured pictorial in the February 2000 issue of Playboy. She was ranked #98 on the FHM 100 Sexiest Women of 2003.

She has also appeared on a few game and reality shows. In 2004, she appeared in Celebrity Mole: Yucatan, in which she was the ‘mole’, the rogue agent sabotaging the group. She was one of the “Gingers” on the second season of The Real Gilligan’s Island (the other was Erika Eleniak), but left the show when she accidentally cut her finger severely enough to sever tendons and require surgery. Angie was also a panelist on To Tell The Truth from 2000 until 2001 and on Hollywood Squares from 2002 until 2004. Everhart was a co-host on the ABC reality show The Ex-Wives Club, along with Marla Maples, and Shar Jackson in 2007.

Everhart’s long red hair earned her three Crown Awards for “Best Redhead” at the Super-Hair.Net website from 2005 to 2007. She also represented the United States in two Super-Hair World Cup tournaments, winning the championship through online votes in both 2006 and 2010.

She is signed to London modeling agency Models 1, and New York Model Management.

On February 28, 2012, she began co-hosting the weekly live podcast Hot N Heavy with The Greg Wilson on the Toad Hop Network. It is recorded at Jon Lovitz Comedy Club & Podcast Theatre.