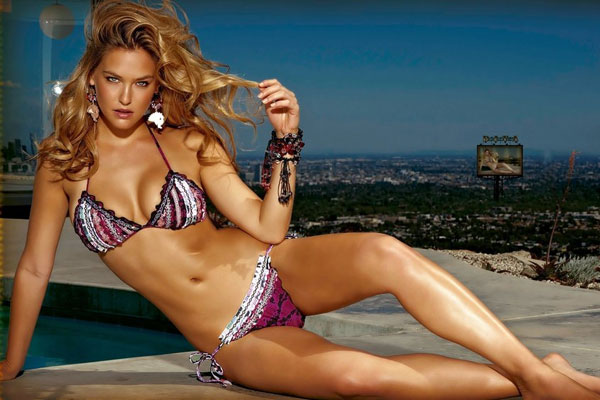 Bar Refaeli once dated Baywatch actor David Charvet. In November 2005, she began a relationship with Leonardo DiCaprio after meeting him at a party in Las Vegas thrown for members of U2. In the course of their trip to Israel in March 2007, the couple met with Israeli president Shimon Peres and visited Refaeli’s hometown of Hod HaSharon. The relationship ended in June 2009. In 2010, numerous reports indicated that their romance had been rekindled, but in May 2011, it was reported that the couple had ended their romantic relationship, although they would remain friends.

Refaeli got engaged to Israeli businessman Adi Ezra in March 2015. She has stated she plans to raise “a big Jewish family” with him. The couple were married in Israel on September 24, 2015.  The couple are expecting their first child in 2016.
As early as 2004, Refaeli received criticism in Israel for evading service in the army. Model Agam Rodberg stated then: “The way Bar Raphaeli evaded army service wasn’t right. It’s worth trying to serve in the army, and only if you don’t feel good there to try and do something.”

In 2007 it was reported that Refaeli had evaded the draft by marrying family acquaintance, Arik Weinstein in 2003, and divorcing him soon afterwards to avoid military service in the Israel Defense Forces, which is mandatory in Israel for unmarried secular Jewish women over the age of 18.

The Israeli Forum for the Promotion of Equal Share in the Burden threatened to boycott the fashion chain Fox if they hired Refaeli, but the two sides reached a compromise in which Refaeli agreed to visit injured IDF soldiers on visits to Israel and encourage enlistment in the army. Refaeli later stated, “I don’t regret not enlisting, because it paid off big time. That’s just the way it is: celebrities have other needs. I hope my case has influenced the army.” She also said: “Israel or Uganda, what difference does it make? It makes no difference to me. Why is it good to die for our country? What, isn’t it better to live in New York? Why should 18-year-old kids have to die? It’s dumb that people have to die so that I can live in Israel.” In 2009 fellow Israeli model Esti Ginzburg, while speaking in support of enlisting, criticized Refaeli for her evasion of military service. In 2011 Refaeli was featured on the cover of Italian GQ’s war-themed May 2011 issue. Refaeli’s avoidance of military service was again raised when IDF Brigadier General Yoav Mordechai criticized the Ministry of Foreign Affairs for casting Refaeli in a 2013 advertisement, saying the use of her as an “official representative of Israel” sent a “negative message” to Israeli society. In 2014, during Operation Protective Edge, Refaeli posted numerous times to her social network accounts, expressing solidarity and appreciation of her fellow Israeli countrymen serving in the Israeli Army and acknowledging a self-taken photo of Israeli troops smiling in front of her portrait.