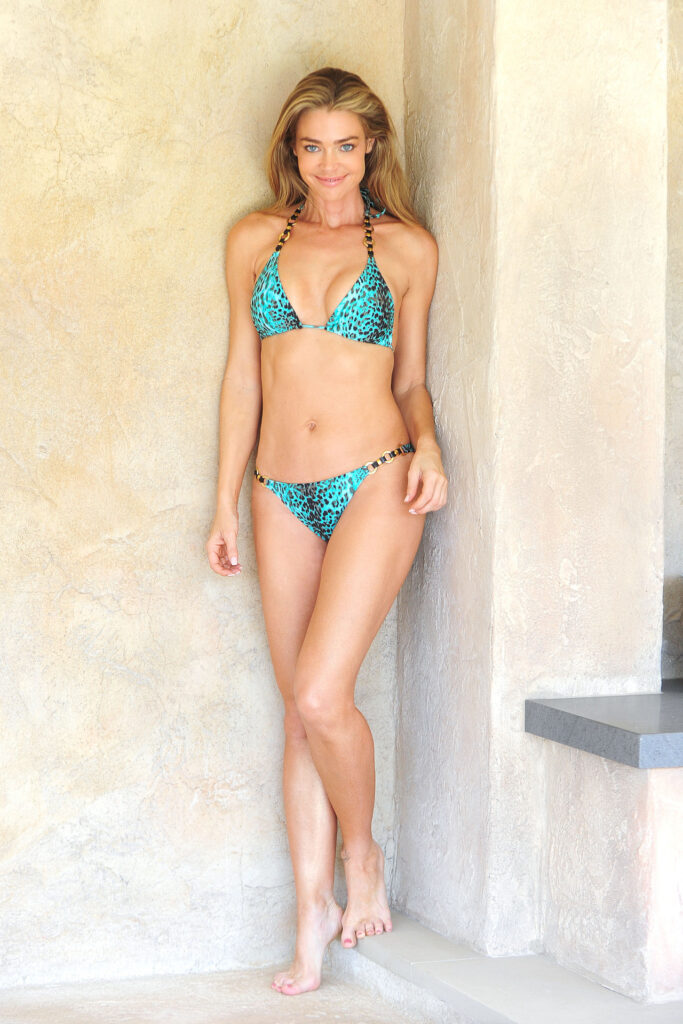 Denise Richards spent the majority of the 1990s appearing in lower-budget films and television shows such as Saved by the Bell, television movies, and guest starring in episodes of several television shows such as Married… with Children (1991), a five-second walk through. She later made guest appearances in shows such as Beverly Hills, 90210 (1992), Seinfeld (1993), Lois and Clark (1994) and a guest-arc in Melrose Place (1996). Her first starring role in a wide theatrical release was Starship Troopers in 1997 for which Richards was nominated for the Blockbuster Entertainment Award for Favorite Female Newcomer. She followed this with a role in Wild Things. Variety praised Richards’ transition from good-girl-type roles to manipulative villainess and the review continued to include her as part of “an ensemble that appears to be enjoying the challenge of offbeat roles and unusual material. There’s not a wrong note struck by the game group of players.” In 1998, she appeared in the music video for the Blues Traveler song “Canadian Rose”.
Richards was cast as the nuclear physicist Christmas Jones in the 1999 James Bond film The World Is Not Enough (1999). Though she considered her role “brainy”, “athletic”, and having depth of character, she was criticized as not credible in the role. Her outfit, which often comprised a low-cut tank top and tight shorts, elicited comments. She was ranked as one of the worst Bond girls of all time by Entertainment Weekly in 2008, and was chosen as “Worst Supporting Actress” at the 1999 Razzie Awards for the role, although, Richards was also nominated for the Blockbuster Entertainment Award for Favourite Actress – Action, for the same film. Later that year, Richards starred alongside Kirsten Dunst in the beauty pageant satire, Drop Dead Gorgeous. Richards, playing a spoiled princess, was praised for her performance by Los Angeles Times for being “as rightly nasty as she is pretty.”

In 2001, she guest-starred in Friends as Ross and Monica Geller’s cousin, Cassie Geller in the episode “The One with Ross and Monica’s Cousin”. Later that year she appeared in four episodes of Spin City as Jennifer Duncan, a love interest of Charlie Sheen’s character. She starred as Sheen’s character’s ex-girlfriend two years later in two episodes of Two and a Half Men. In 2005, she starred in the short-lived UPN series Sex, Love & Secrets. Richards appeared in films such as Valentine (2001), Undercover Brother (2002) and Scary Movie 3 (2003). In 2003, she made a very brief appearance in the British romantic comedy, Love Actually. In 2005, she starred in the ensemble drama, Edmond alongside Julia Stiles.

In December 2004, she posed for a nude pictorial in Playboy magazine, five months after giving birth. Richards posed semi-nude for the July 2006 issue of Jane magazine to raise money for the Clothes Off Our Back Foundation. In 1999, she ranked 9th in Maxim’s 50 Sexiest Women and in 2001 she was voted 2nd in FHM’s USA 100 Sexiest Women, 5th in FHM’s 100 Sexiest Women and 19th in AskMen.com’s 50 Most Beautiful Women. She was named one of the “100 Hottest Women of All-Time” by Men’s Health. In 2008, she reunited with her Wild Things on-screen mother Theresa Russell in Jolene. Richards appeared on the 8th season of Dancing with the Stars, paired with Maksim Chmerkovskiy. She was eliminated second on March 24, 2009.

In 2010 she joined the cast of Blue Mountain State, a Spike comedy series. Richards plays Debra, the ex-wife of Coach Daniels. In July 2011, Richards published a memoir The Real Girl Next Door, a New York Times Best Seller. Richards was part of TV Guide Network’s show, Hollywood Moms’ Club, which aired in November 2011. In September 2011, Richards reportedly turned down $100,000 to appear as an ex-girlfriend at Charlie’s funeral in Two and a Half Men. A month later, she began filming a guest spot for an episode for the sixth season of NBC comedy 30 Rock. In 2012, Richards joined the cast of ABC Family pilot, Twisted (formerly Socio). In February 2013,  ABC Family commissioned the drama for a full series.