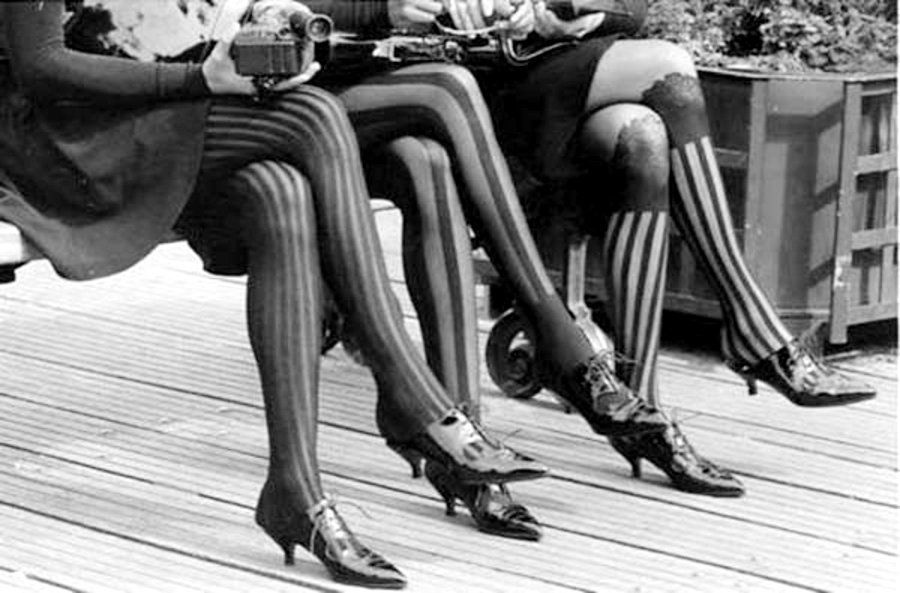 – This morning I sat through presentations by representatives of three companies bidding on a large account with our company. The reps were all finalists from a pool of about a dozen companies that had placed bids and gone through a three month interview and screening process with us.

Each of the three companies (two from New York and one from a smaller southern town) knew they were among the final three. Each company knew that the contract would be awarded based, in large measure, upon the strength of their presentation to us this morning. Under these circumstances one would think that each of the companies would want to make the strongest impression by sending their strongest people.

Each company did make a dazzling audio/visual presentation. Each company had either three or four representatives doing the honours.

For three hours I listened and watched as these people sold their hearts out. Incredibly, only one woman (out of a total of six) in the first two presentations wore hose. The others were bare-legged. Bare-legged! Unbelievable!

But the final company (the southern one) stood out from the others. This company sent three women and one man. Each of the women was beautifully coiffed, made up and dressed. All of the women wore hosiery and I do believe (or at least I’d like to believe) I saw garter bumps on the oldest woman’s skirt! Now, for the kicker! None of these women was older than thirty-five. Hurrah!

Does this mean that when it really matters, when careers are made or broken on one presentation, when millions hang in the balance that some of today’s younger women really do know how to dress?

I would never decide to award business based only upon one’s manner of dress but these three companies were judged as equals going into today’s presentations. In my mind one of them just blew the others out of the water. Their manner of dress told me they respected my company.

The sophisticated New York companies dressed and acted as though they were coming to “casual day” at the office. One man was actually in sandals (I was told he was their “creative” guy.) The small southern company out-classed them all.

Ah, the power of stockings!

If today’s young women can dress this way when it is critical to their success why can’t they do it all the time at work?

– Well, it’s probably a function of corporate policies… or lack thereof. What’s your company’s policy with respect to dress? And was it communicated to the three proponent firms before they showed up for their dog and pony show with you today?

– You have a valid question. We did not discuss our corporate dress policy with any of the companies that were asked to bid. None of them called to inquire about our policy prior to meeting with us over the last three months. The small southern company, I am told, always dressed in proper business attire. (I only met them for the first time this morning. )

I think it is a good sign if a company calls to determine the dress code prior to their first meeting at our office. I consider it a part of due diligence. It tells me something about them and their regard for me. Maybe I am wrong but that’s the way I take it.

My company has a business-casual dress policy. I do not permit bare legs on women nor do I permit sockless feet amongst men. But, I do require dresses/suits/skirts and hosiery amongst my inner circle of executives. There is no written policy to this effect but I consider that the more intelligent members of my staff will pick up on this without having to be told.

I have always thought that a business person should dress like the position he/she wishes to attain rather than the one he/has.

– When I was temping as a secretary last year I wouldn’t dream of not wearing hosiery to the office. It wasn’t until I started reading posts here concerning the subject (there have been a few over the last couple of months) that I realised that wearing hosiery to work was no longer a standard dress code.

I’m not anti women wearing trouser suits in the office but when skirts are worn it seems crazy to wear them in a professional environment without hosiery. It’s like a man turning up to work in a T-shirt. To be taken seriously at work you have to look the part (male or female), like it or not… There have been a few reports in the press recently that dress down Fridays are not working (hee hee!) so hopefully old fashioned dress codes will come back into place.

– In the technology software segment I compete in many employers are afraid to set high dress expectations. Nerds and “femin odd skis” teamed up to form a coalition to get even with “suits” because they resent power figures.

In a coincidence, my team presented to a review committee of a large Southern bank last week. Our largest competitor – Siebel – is well known for its success, as well as its suits and hosiery dress code.

The CIO of the bank, dressed in the business casual uniform common today, asked during the formal introductions why our team was clad in business attire. Before I could respond, he offered, “I bet you think Siebel is the leading competitor to win our business, and you want to look like a leader”.

My response was, “I respect my competition, but my team meets all clients in proper business attire. We don’t want our clients to think we have a casual attitude about their customer relationships”.

My team was invited to present to the review team by the chief loan officer of the bank. The CLO turned to the CIO and said, “I told you not to dismiss these guys because they’re small. The buttoned-down approach they take to their image applies to their approach to our issues. They do what they say”.

Sorry, no stockings anecdotes or agreements in hand to prove our approach influenced a decision – yet. Just a recount of one “rebel’s” stand against current casual convention, and the noted respect from a senior officer of one of the USA’s largest banks for proper attire in business.

– While sitting in my office/cubicle/workspace, in the near dark by the glow of the CRT in front of me, I may be wearing dockers and a polo shirt.

Not only does it inspire confidence, but it shows you are serious about what you do and you want the client to know it. When I bring a team with me, I go over what I expect them to wear and how to behave, regardless as to whether or not they’ve gone with me to meet a client previously.

– As a postscript, I am pleased to report that our account was awarded late this evening to the small southern company with the well-dressed presenters.

Needless to say they were thrilled. My VP, Marketing and her staff had favoured this company and our executive committee formally endorsed their selection tonight. As I told you in my prior post all three companies had been considered equally qualified. But, when it came down to a vote this evening the southerners won easily.

The southerners will be handling promotion and publicity for a small project in which we have recently invested. Based upon the comments made by my staff this evening prior to the actual vote it was clear that, all other things being equal, the business-formal attire of the southern presenters both during their prior visits to our office and at the formal presentation left a lasting positive impression in the minds of my staff.

My Marketing VP said it best when she remarked, “I felt very comfortable with them from the beginning. They looked like us and they looked like the image we want to project to our markets.”

They were elegantly dressed, professional looking people… and not a bare leg in sight! I will be speaking to their president next week and I intend to tell him that, in my opinion, the margin of their victory was about 15 denier. I’m pretty sure he won’t get it but, dear Stockings HQ friends, that will be our little inside joke.

So ladies, fear not. We may not be able to comment to you (especially in today’s corporate suites) about how much we appreciate your beautiful nylon clad legs. But, be assured, we do notice. And sometimes the extra effort you take to dress your legs pays unexpected dividends.