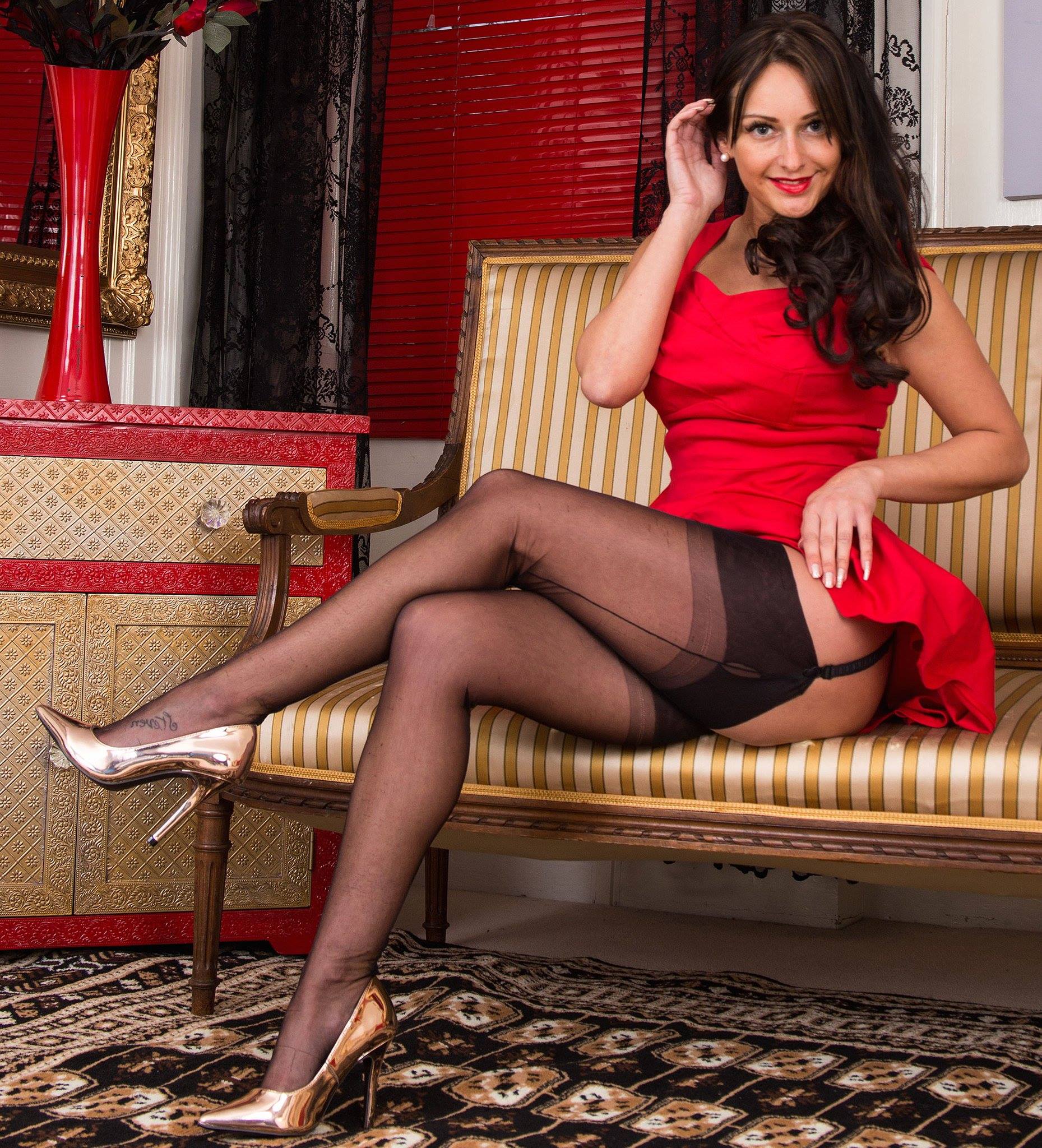 I was on a business trip in Las Vegas this week, and extended my stay through Friday night for a Saturday noon departure. From my seat at a blackjack table I noticed the unmistakable sheen and seam of fully fashioned stockings. I barely finished my last hand, grabbed my chips, and followed the pair of stockings to the lounge where she was standing at the bar waiting to order a drink. I assumed these FF stockings adorned the legs of a “lady of the night” because I was in Vegas, and they were everywhere. As it turns out I was right, and as we chatted I discovered that she was top of the line: $1,000 per hour with a three hour minimum. Without spending a lot of detail on her profession, suffice it to say that I’m not someone who hires those services, especially at that price.

Anyway, all I was interested in was her stockings, and why she wore them. She was very open. We ended up sitting at the bar for an hour or so, and I bought her three or four martinis. I confessed to her that I was not able to hire her, but would gladly buy her drinks and tip her for talking to me about her stockings until she found a client or had to leave.

She buys all of her FF stockings from Touchable in the UK and has an extensive wardrobe of garters and corsets. She was definitely high class (if there is such a term for hookers), and her pricetag validated that. She was very open to sneaking peaks at her stocking-tops, and almost had me convinced to spend a thousand dollars for an hour up in my room. She said she would even let me keep the pair she was wearing because she had a spare pair in her purse. I tried to keep the conversation down in the bar, but after all, she was on the job, and eventually the subject tired her and she found a gentleman who could afford her price.

The time she spent with me was very much appreciated. She was very knowledgeable in the subject matter and I love women like that. I am thankful that I did not let the alcohol do the thinking for me, and I saved $1,000. But I can only imagine how those stockings would have come off her legs in my hotel room. Knowing me, I would have ended being talked into spending more money. Oh well, it was an interesting encounter to say the least, and I’m sure some of you out there would have enjoyed it as much as I did.

– That is an excellent story and I am glad you got a chance to talk to her. However, I was a bit disturbed that you immediately thought she was a “girl of the night” just because she had FF stockings on. My fiance and I went to Vegas about a month or so ago, and one night I went down to the blackjack tables to play a few hands after I got out of the shower and dressed. My fiance had to take her shower yet, so I went down to play a few hands and told her where to meet me. Well, to my surprise, when she came down to the table she was wearing a black pair of FFs I had gotten her from Secrets in Lace. She had a conservative dress about knee length, high heels, and her FFs. Now my fiance is hardly a lady of the night, and her getting prejudged like you prejudged that lady would have offended her greatly… probably enough to where she would not wear them again in public. If people keep thinking that stockings are indicative of being a “hooker”, then we have no hope of having them mainstream as many here would like.

I am not personally attacking you, I just found it interesting that your first thought upon seeing FFs in Vegas was that the woman was a hooker. As a stocking lover (which you claim to be) you can’t prejudge women like that because if you do, one day you may offend a woman that is not a hooker. My fiance is hardly a hooker, and wore the FFs to surprise me and have a wonderful night. I am glad someone like yourself or another person didn’t approach us to ruin an experience she was trying to make positive.