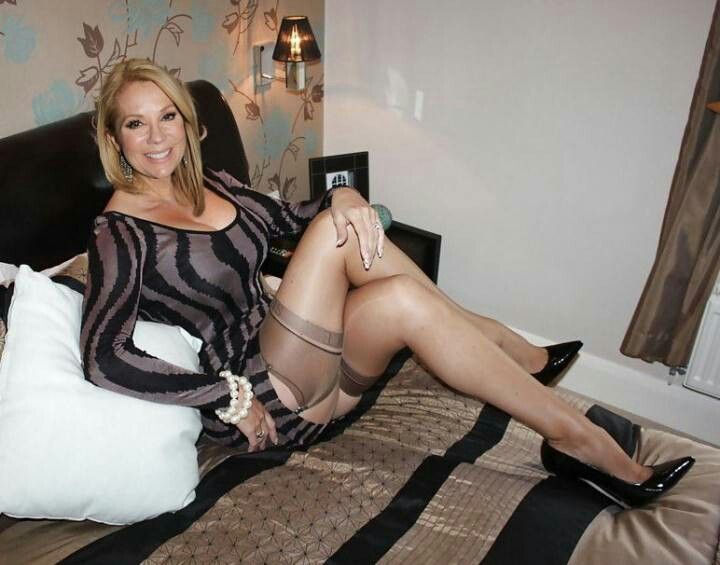 Off the top, my picks would be countries in South America or Eastern Europe. I am perhaps naively surprised whenever I encounter women from South America. They are usually quite feminine and very well-tailored, and virtually always with nylon hosiery and smart shoes. The reason I’m surprised is I usually think these countries as hot weather climes. But a classy woman obviously knows that regardless of weather she enjoys being well-dressed and that includes nylons. A good argument against all those nay-sayer North American women who complain it’s ‘too hot’ to wear hosiery in summer!

– In terms of women who are not afraid to be as elegant as we men would prefer: 1. Japan 2. France 3. Russia

– As most of our female readers seem to be from the US or UK you’re not making us feel as special as we should! Running a hosiery Web site and looking at sales, Welsh and Scottish ladies would get my vote.

– I guess I had better define what I mean by “feminine”. To me, feminine is the opposite of masculine. The women I consider the most feminine are the ones who by their manner, attitude, appearance and dress are consciously, comfortably and gloriously the most different to men. I do not wish to offend any woman. I named Japan, France and Russia (in that order) because my personal contact with women from those countries has been extraordinary by virtue of their sophistication, intelligence, elegance and their complete confidence in their role as women and lovers. They stand out when compared to US (too many to count) or British women (four) I have known.

The Japanese women with whom I have had relationships (three) have had an endearing quality of hospitality. That’s the right word. They found great personal pleasure in pleasing others. Their smaller stature made them seem fragile and made me want to protect them. But, believe me they are strong willed and need no protection. None of my Japanese lovers was a stockings wearer until I expressed my interest in seeing them in them. I only had to mention it once. They wore stockings when they were with me until our relationships ended. They are very tender lovers and are not pleased unless their lover is pleased. They love to be cuddled and seem to possess no temper whatsoever. When they are hurt they let you know. Because they want to please you, you want to please them all the more.

I have also known three French women intimately. One wore stockings before I met her. The other two only after we started dating. What can I say about French women! They are the epitome of style. They are adventurous lovers and they are so naughty. Yet, they are capable of appearing to others as ice queens. Their lingerie was extraordinary. One lover, Yvette, always wore bikini panties with satin ribbons at the sides. I untied them with my teeth. Another, Marie, was into discipline games. She was a natural submissive. And yet, she was an accomplished professional and a completely confident woman. They smoke too much. But hey… who’s counting?

I have only recently taken a Russian lover. She is new to the US and is completely amazed at the things we take for granted. The first time she saw a large grocery store she just stood there in awe. I had to push her through the checkout line. She is an animal in bed. She makes love with energy and abandon. She literally throws herself into sex. (She’s going to kill me!) But, she is every inch the lady. I took her to Victoria’s Secret and she melted. We spent almost a thousand dollars in one afternoon. Raisa is a physicist teaching at a local university. She is quickly becoming more comfortable with courtesy being shown towards her. She makes me appreciate my freedom. She loves the feel of stockings and considers them luxurious beyond belief. She now wears them daily.

American and British women are wonderful. But many American women are very uncomfortable with being treated as ladies. By that I mean they are self-conscious about being politically correct and very uptight that the manner in which they are being treated is democratic. They are uncomfortable with doors being opened for them and they are ill at ease with chairs being held for them or men rising when they enter a room. I’m sure someone will say this is because American men have ceased being gentlemen. And, to a great extent that is true. But, I can tell you that this started during the ’60s and ’70s when women’s lib became the battle cry. An entire generation of American mothers and fathers raised their children to eschew courtesy in fear of being perceived as inequitable. Pity.

As lovers the American women I have known are tough to classify. They seem to love pantyhose and they seem to have that Puritan/Catholic guilt thing pretty well nailed down. They will wear stockings if you buy them and they want to be sure you know it is being done as a favour. They want to have an orgasm but they think it might be “dirty.” They want to make wild muscrat love but they worry that their pleasure may be showing. They want everything to be equal so they are willing to give only when and if they have already gotten. It’s a paradox.

My British lovers were quite hot. This was, initially, very surprising to me because we American’s most often picture these women as being quite sexually reserved. Not so in my experience. Once behind closed doors they were natural (and QUITE creative) lovers. And, after the French accent, the British accent is my favourite. So this only heightened my thrill. Stockings were not a problem. Courtesy was quite comfortably accepted and expected. Hooray for British women! I hope this explains my previous post.

– Japanese and Russian women get my vote every day, especially the extremely feminine and respectful former. It is such a shame that more women are not the same as the Japanese: Beauty, perfection and total femininity!

– There was a survey done in a men’s magazine, not so long ago, and actually Australia and Italy were the largest buyers of stockings. In the UK, you were most likely to see stockings in the Liverpool area. So lets all buy a shell suit and grow a tash and get up there! Calm down, calm down. LOL.