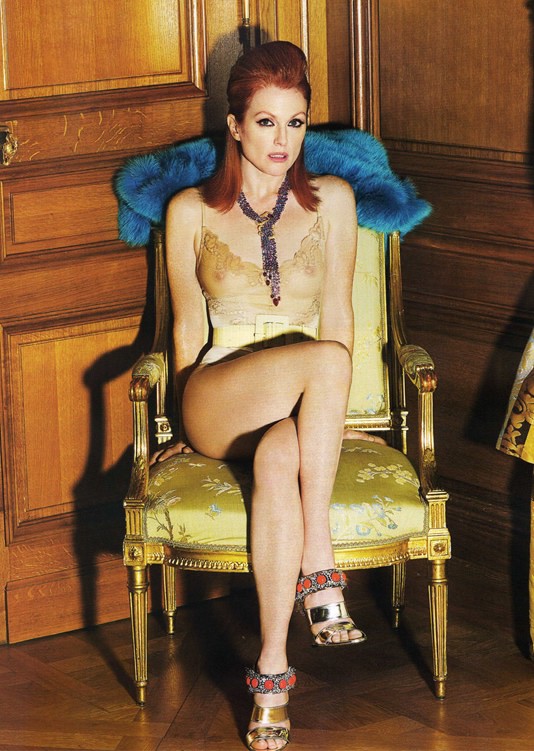 Julianne Moore (born Julie Anne Smith; December 3, 1960) is an American actress and children’s author. Prolific in film since the early 1990s, she is particularly known for her portrayals of emotionally troubled women in both independent and Hollywood films, and has received many accolades, including the Academy Award for Best Actress.

After studying theatre at Boston University, Moore began her career with a series of television roles. From 1985 to 1988, she was a regular in the soap opera As the World Turns, earning a Daytime Emmy for her performance. Her film debut was in Tales from the Darkside: The Movie (1990), and she continued to play small roles for the next four years – including in the thriller The Hand That Rocks the Cradle (1992). Moore first received critical attention with Robert Altman’s Short Cuts (1993), and successive performances in Vanya on 42nd Street (1994) and Safe (1995) continued this acclaim. Starring roles in the blockbusters Nine Months (1995) and The Lost World: Jurassic Park (1997) established her as a leading actress in Hollywood.

Moore received considerable recognition in the late 1990s and early 2000s, earning Oscar nominations for Boogie Nights (1997), The End of the Affair (1999), Far from Heaven (2002) and The Hours (2002). In the first of these, she played a 1970s pornographic actress, while the other three featured her as an unhappy, mid-20th century housewife. She also had success with the films The Big Lebowski (1998), Magnolia (1999), Hannibal (2001), Children of Men (2006), A Single Man (2009), The Kids Are All Right (2010), and Crazy, Stupid, Love (2011), and won several awards for her portrayal of Sarah Palin in the television film Game Change (2012). Moore went on to give an Academy Award-winning performance as an Alzheimer’s patient in Still Alice and was named Best Actress at the Cannes Film Festival for Maps to the Stars (both 2014). She also appeared in the final two films of the Hunger Games series and starred in the spy film Kingsman: The Golden Circle (2017).

In addition to acting, Moore has written a series of children’s books about a character named “Freckleface Strawberry”. She is married to director Bart Freundlich, with whom she has two children.