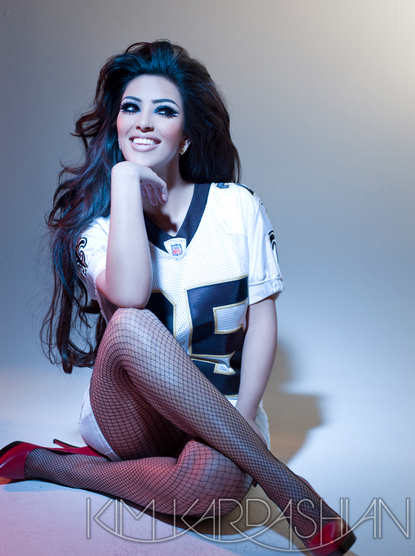 Kimberly Noel Kardashian West (October 21, 1980) is an American media personality, businesswoman, socialite, and model. Kardashian first gained media attention as a friend and stylist of Paris Hilton, but received wider notice after releasing a 2003 sex tape with her former boyfriend Ray J in 2007. Later that year, she and her family began to appear in the E! reality television series Keeping Up with the Kardashians. Its success soon led to the creation of spin-offs including Kourtney and Kim Take New York and Kourtney and Khloé Take Miami.

In recent years, Kardashian has grown an online and social media presence, including hundreds of millions of followers on Twitter and Instagram. She has released a variety of products tied to her name, including the 2014 mobile game Kim Kardashian: Hollywood, a variety of clothing and products, the 2015 photo book Selfish and her eponymous personal app. Her relationship with rapper Kanye West has also received significant media coverage; the couple married in 2014 and they have four children together.

Time magazine included Kardashian on their list of 2015’s 100 most influential people, while Vogue described her in 2016 as a “pop culture phenomenon.” Critics and admirers have described her as exemplifying the notion of being famous for being famous. She was reported to be the highest-paid reality television personality of 2015, with her total earnings exceeding US$53 million.

In 2006, Kardashian entered the business world with her two sisters and opened the boutique shop D-A-S-H in Calabasas, California. In February 2007, a sex tape made by Kardashian and Ray J in 2003 was leaked. Kardashian filed a lawsuit against Vivid Entertainment, who distributed the film as Kim K Superstar. She later dropped the suit and settled for a reported US$5 million, allowing Vivid to release the tape. Several media outlets later criticized her and the family for using the sex tape’s release as a publicity stunt to promote their upcoming reality show.

In October 2007 Kardashian, in addition to her mother Kris Jenner, her step-parent Caitlyn Jenner (Bruce), her siblings Kourtney, Khloé, and Rob Kardashian, and half-sisters Kendall and Kylie Jenner, began to appear in the reality television series Keeping Up with the Kardashians. The series proved successful for E!, and has led to the creations of spin-offs including Kourtney and Kim Take New York and Kourtney and Kim Take Miami. In one of the episodes, Kim discussed an offer from Playboy to appear nude in the magazine. That December, Kardashian posed in a nude pictorial for Playboy.

In 2008, she made her feature film debut in the disaster film spoof Disaster Movie, in which she appeared as a character named Lisa. That same year, she was a participant on season seven of Dancing with the Stars, where she was partnered with Mark Ballas. Kardashian was the third contestant to be eliminated. In January 2009, Kardashian made a cameo appearance during an episode of the sitcom How I Met Your Mother, in the episode “Benefits”. In April, she released a workout DVD series through her television production company Kimsaprincess Productions, LLC which has seen the release of three successful workout videos, Fit in Your Jeans by Friday, with trainers Jennifer Galardi and Patrick Goudeau. Kardashian played Elle in four episodes of the television series Beyond the Break.

Kardashian became a guest host of WrestleMania XXIV and guest judge on America’s Next Top Model in August of that year. In September, Fusion Beauty and Seven Bar Foundation launched “Kiss Away Poverty”, with Kardashian as the face of the campaign. For every LipFusion lipgloss sold, US$1 went to the Foundation to fund women entrepreneurs in the US. The following month, she released her first fragrance self-titled “Kim Kardashian”. In December 2009, Kardashian made a guest star appearance on CBS’s CSI: NY with Vanessa Minnillo.