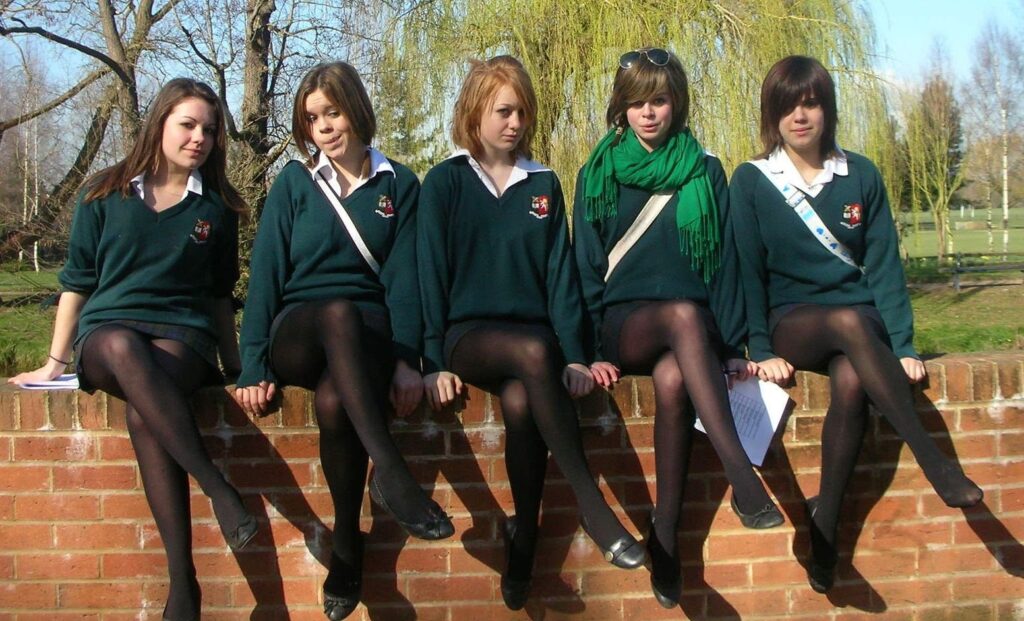 I was at secondary school from 1975 – 1980. During circa. 1978, I vividly remember the girls in the fourth/fifth forms consistently wearing stockings and suspenders. I guess it was a bit of a ‘craze’ as we were all aware of it and the girls often went to extraordinary lengths to let everyone know they were wearing them. Above and beyond simple ‘flashing’ of stocking tops via slit pencil skirts or the deliberate practice of hoisting to a selected audience, I remember other expedients being used such as the wearing of one white and one black stocking (fitting snugly with the rise at that time of neo-mods) and the wearing of fully-fashioned stockings (white and black).

I am truly not exaggerating when I say that at this time about 50% of the girls were teasing us with all this. There was clearly a class dynamic at work also as I remember that the above behaviour was almost exclusively reserved for the streams below A; which was largely populated by the children of the professional classes (the local grammar system having been scrapped in 1974). I have one of those long horizontal year photos in the loft and looking at it the other day, I was struck by the girls, 95% of whom were wearing black hosiery! I could pick out many (more than twenty) who I personally knew were wearing the correct undergarments on a regular basis.

I later went on to take my history degree at Durham University and a fellow female student did her third year dissertation on: ‘The History of Underwear in 19th Century French Society’. We discussed my experiences but alas, she was unable to elucidate on her contemporaries due to a combination of factors.

Does anyone else have similar experiences of their school days? Was my school unique or (forties and fifties schoolgirls in straw boaters notwithstanding) was this a common phenomenon?

I can name the school and some protagonists if anyone has any direct interest, but at this stage, I can tell you that it is in Norwich, Norfolk, UK.

These Girls Have similar uniforms to Tonbridge Grammar School with the green top sweaters and tartan green skirts. I see I’m not to be is girls on the train, not so much anymore but maybe that’s because I go later at 8:50 of. With lockdown call some of the schools were not we are not working summertime. Yes I agree with the writer of the previous comment the girls in black stockings or tights/pantyhose are very sexy. Even the term hosiery is sexy remind me of the Saint trillions girls. There is just something about a woman in black tights/stockings on a young woman. Obviously I don’t want to talk about the fact that some of them are schoolgirls because he’s girls age of consent and one wants to be decent about it. But yes I love black stockings. And singer looking . The idea of seeing a pretty flight attendant with black hosiery on and black high heels is. a massive turn on for me personally. I don’t really mind whether they are stockings or tights they are both sexy how much preferable to seeing a flight attendant wearing trousers as I believe is sometimes the case it is PC gone mad. I love the idea of maybe seeing a bit of stocking top of the dress or skirt is hoisted up For me it is a Full appreciation of all woman
/ womanhood. Also when a woman was pantyhose what a great expression that is, the idea of seeing the top of the black tights and some Goss it is such a bloody turn on I love nylons and I love women women are great and sexy and great in hosiery. Long may they continue to work hosiery and keep the pantyhose/ Stocking industry of the United Kingdom fully alive. I love hosiery woman! I do like those are also other colours like natural colour time or grey stockings. Anthracite is another colour. Grace grey colour. My own wife wears grey and black and I love otShe also looks good in natural colour and she wore to our flat yesterday for wedding in Thailand she’s is Thai by the way.

I strongly agree with your words, it’s a matter of appreciation!

GREAT MINDS THINK ALIKE! i ALSO like to see a mature woman wearing just black pantyhose or stockings with just high heels on. wHAT A BLOODY TURN ON! mAYBE BRA and knickers or G STRING TO KEEP THINGS DECENT! on another note a woman bending over in a short skirt and seeing their stocking tops and milky white flesh , Maybe a hint of knicker and imaging underneath the knickers the quality of womanhood! Ideally flight attendants bending over. A hint of cleavage is nice too. i like to see the flight attendants bra straps under their crisp white blouses. i love woman.