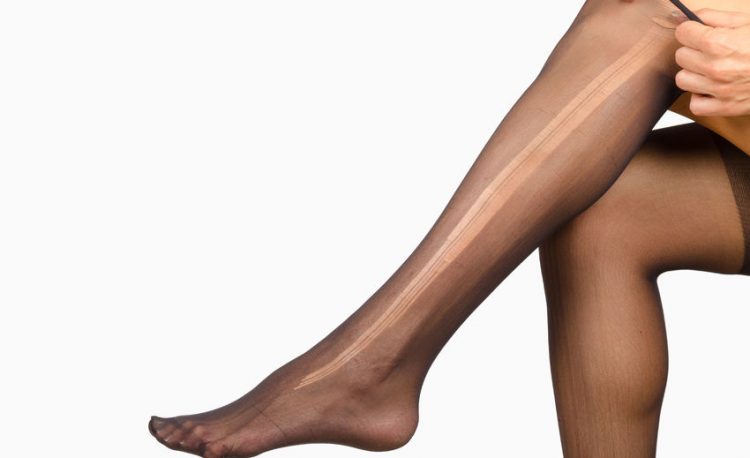 The girls at my school wore stockings and suspenders in the first couple of years of secondary school, then moved over to tights and shorter skirts shortly afterwards. “I remember one girl, whom I didn’t pay much attention to because she didn’t interest me, wore very short skirts. I thought, like the others, she was wearing tights, but walking behind her going upstairs I noticed she was wearing tan stockings, and I could see her navy blue knickers and, astonishingly, red garters (not garter belt, as in the usa, but the elastic garter that goes around the thigh to hold the stockings in place). The frilly garters bit into the stocking tops, wrinkling the dark tan welt and squeezing the top of her thighs.

This shook me with excitement, and I wished the flight of stairs had been much longer. Thereafter I saw this girl in a completely different light, but was never lucky enough to catch another glimpse up her skirt.”

In one of my junior high classes, Science I think, I sat next to a Jr. Miss named Cathy. Cathy was one of those that almost always wore sheer stockings. Usually a light beige, almost nude. Our Science class desks were different than the typical classroom. These were long tables, and you sat side by side, two to a table. Of course, every opportunity that afforded itself, I would try to catch glimpses of Cathy’s nyloned legs.

One day, before class was beginning, she was fussing about a snag in her hose she had just gotten, and then pulled her legs out from under the table to show me. The snag was right on top of her left leg, just above her knee, a little tiny hole, with a string of nylon sticking up from it.

– ‘See?’ she said as she raised her skirt up some for a better view.

Boy did I see. Of course, I tried to act rather matter of factly about it all… but the image before me was burning so deep in my mind, that today, 30 some odd years later, I still see if vividly!

– ‘Totally ruined a stocking!’ she quipped.

‘It’s just a snag.’ I said reassuringly. (Still ‘nonchalantly’ gaping at her stocking clad leg for all I was worth!)

Really? I thought to myself. Not giving her time to reconsider, or time for the bell to ring and end this little unexpected nylon experience… I reached over and took hold of the little piece of nylon filament thread that was sticking up… and pulled. I felt a popping sensation… and immediately a runner almost a half inch wide simultaneously zipped up her thigh and down over her knee, disappearing out of sight.

‘Told you!’ she said triumphantly. ‘Look… it ran all the way up to the top!’ With that, she raised her skirt some more until the bottom edge of her stocking top was visible!

“I nodded in agreement as I feasted my eyes on the wonderful sight before me. (I hope I wasn’t hungrily gazing at her stockinged thigh in an obvious way… but I’ll bet I was!) Then the buzzer sounded to begin class… and her nylon charms were covered, and under the table went her legs. But I’ll never forget that scene or experience! Ah yes… in many ways… those were the days!”

As a young boy I went to a good junior school where learning manners were a fundamental part of our education.

One day we were told we were to be visited by an important guest and, as it was the done thing, I was to hold the door open for the guest when she arrived. The guest duly arrived and I did my ‘gentlemanly bit’ and held the door. As she stood in the doorway, with her back to me, I noticed her lovely legs and these tan seamed stockings.

As I stood there, it was obvious no one was looking at me and half hidden by the open door, I dropped to my hands and knees, and summoning some courage, dared to look up her skirt. The sight of the lovely seams travelling towards the heavens, her suspender belt clips and the piece of flimsy white cotton gusset that covered her modesty has stayed with me till this day.”