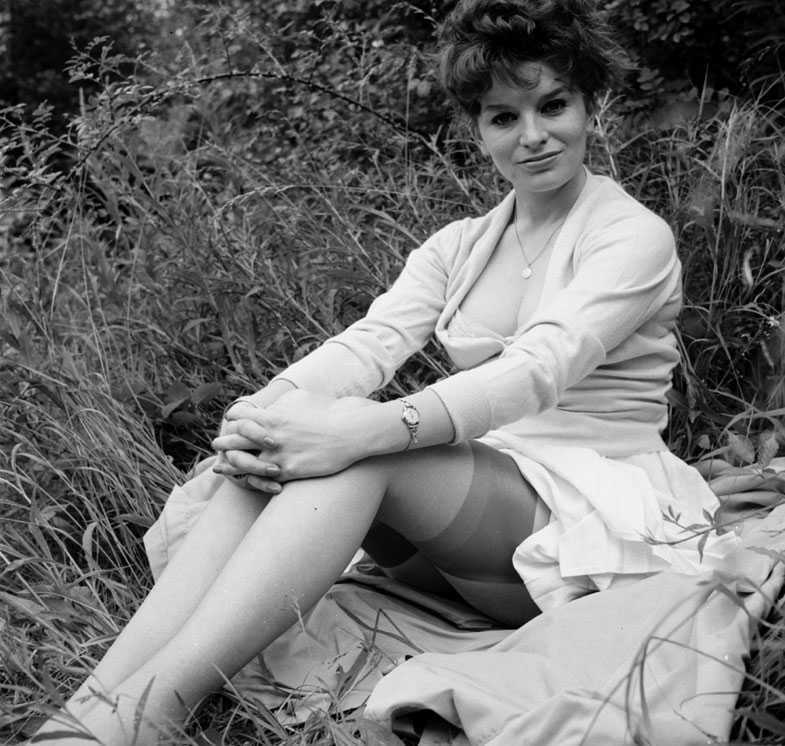 – I saw a young mum yesterday with two toddlers wearing a polo neck to, black jacket, check skirt flat-heeled shoes and barely black sheer hosiery. I could not tell if they were stockings, but what a pleasure to see a mother with a shapely figure and legs displaying them instead of in leggings or jeans! Are there any other women with children who take time out from the hustle and bustle of child-rearing and being a full-time housewife to make an effort and display their legs to their full potential ?.

– It’s always a nice experience to browse through old copies of Life mag circa 1950s and look at how model moms were once displayed. Always dressed in their finery, which meant dresses, skirts and blouses, pumps and well, FFs (but we knew that). There are plenty of ads showing moms with their daughters – serving them milk or lunch in the kitchen, helping them with jigsaw puzzles or homework, or taking them for walks to store or school. The moms were always in high fashion, and the daughters, well, in frilly dresses. I remember one ad (probably for Johnson & Johnson) showing a mom kneeling on the floor, scrubbing down her child in the bathtub. How was mom dressed? Beautfully in frilly dress and apron, pearls, high-heels. While we long for glamour in today’s world there might be some consolation in having images from a – sigh – long lost time.

– The thing is, though, that is an era long gone and sadly lost: Look at them now: the majority of women have a child and think that they have done what God intended they should do and then decide, what the heck, why be feminine! Out with leggings, sloppy sweat shirts, baby food and vomit on the shoulder, as well as, ‘I have been busy all day, can you get a take away?’

Even Princess Diana after she ‘done her duty’ to ‘Queen and country’ and produced an heir to the throne was pictured on the steps of the Portland Hospital in London wearing pop-socks !

Mind you, maybe Camilla wears stockings and suspenders when Charles feels a bit fruity at Highgrove? And no, please, let’s not start the debate as to whether Di wore stockings at all again !

– As a father of two daughters I can say that being a parent these days (and, I suspect, forty years ago) is bloody hard work. In fact I am amazed that mothers back in the 1950s ever had the time to glam themselves up – yes, Jackie Kennedy could do it but then she had servants. I think that the idea that mothers were glamorous back then was just a myth; if you think about it, a picture from Time circa 1952 of a mother and her kids is about as relevant to reality then as a picture from Hello! today – that is, staged, with the subjects dressed in their best clothes.

Women back then were subject to severe peer pressure to look their best and wear make-up at all times and I am sure that many resented having to live up to that.

My wife wants to look her best but when you have a baby who is likely to cover you in sick, it is easier to slip on a t-shirt and trousers to go to the shops or to pick up the older daughter from school.

Yes, it is nice to see young mums with kids dressed up in a skirt and hosiery but don’t condemn the others simply because they are too tired/stressed out/rushed off their feet to dress up.

And for your information: in a previous existence, my wife was a stocking wearer and promises me that she will be again. I believe her, so much so that I bought her a couple of pairs of RHTs recently.

– All sides of the argument have merit. It is unlikely that a busy mum with two kids would be too dressy. However, ladies that I have worked with, once they had the kid(s) just changed and lost their dress sense – and I mean for occasions where a nice skirt and shoes would have been in order. Some years later, guess what – they are just a statistic, minus husband. I guess a little effort would have kept the husband interested, and you guys (and a lot of regular lady contributors) out there all appreciate this point.

There seems to be a attitude problem – “accept me any way that I am” – idealistic but it does not work in real life. Most of us who do not have perfect bodies, have to make the most of it by dressing in an appealing manner.

– As for the ‘severe peer pressure’ argument of an earlier era, this argument has been raised in other contexts. Indeed women were ‘socialised’ into more feminine roles than they are now. But many women ‘wanted’ to be this way. By contrast, few women in today’s world seemingly want to be. So is this a ‘synergistic’ thing: women being told they had to dress and act ‘like ladies’ versus their desire to ‘want to be this way?’ Conversely, has the women’s movement and other modern sociological trends now ‘socialised’ women (a new form of ‘peer group pressure’) into wanting to be less feminine? A further observation: many of those feminised Fifties women are now in their 70s and 80s. Many walk around all day wearing running shoes and sweats, same as younger counterparts. Obviously these women are ‘liberated’ from the tyranny of skirts, heels and stockings. Then again, sometimes the only women maintaining the ‘looks’ of earlier era are women in this age group. And many of these elderly women complain about the declining standards of dress.

– I agree that there is a “love me, love my mess” attitude that is pervasive these days. I’m guilty of it as much as the next person. Yes, it does take a little bit of extra work to look good when you leave the house – and kids are not an excuse.

I remember my mother getting me dressed to the nines to leave the house when I was a little girl – floral dress, matching pinafore, lacy socks and co-odinating shoes. Meanwhile, my mother would be finishing her own hair, makeup, and all the while standing half-dressed with my hands clutched between her knees so she could keep an eye on me. She’d stand with me lodged between her legs and the dresser. But when we walked out the door, I was neat and clean and Mom was happy.

To this day, she does not leave the house without “her face”. And because that’s what I thought all ladies did, I grew up to do the same thing.

But if you think I’m putting on the June Cleaver bit to scrub the bathroom when leggings and a t-shirt would be best, you’re outta your mind! There has to be some compromise, doesn’t there? And what about all the husbands who let themselves go to hell? We’d certainly appreciate it if you could look your best whilst flipping that big sirloin in the backyard!