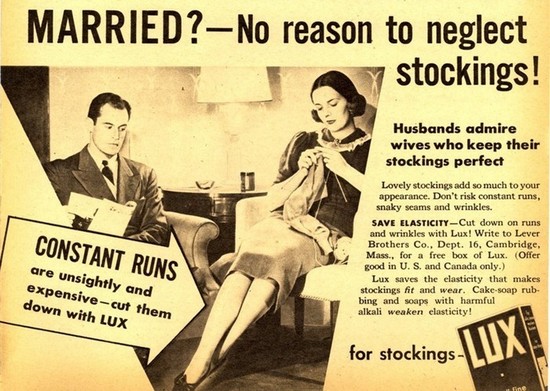 One of my earlier memories of stockings was over a decade ago. Sheila is now my wife, but at the time, she was an office manager in a large insurance company. She always wore stockings and high heels with her business suits. Back then, office attire was a lot less casual than it is today.

Anyway, I was meeting her after work at a party. We were in a group of 18 to 20 people telling jokes and having a good time. One of her jokes was so funny I had to go across the room to tell her so. She was sitting on the end of the sofa and patted the cushion next to her, motioning for me to sit down. As I did, she shifted her weight to face me, and re-crossed her legs.

Sheila has great legs. She crossed them slowly and rested her hand on her knee. Her skirt had ridden up a few more inches than before, and her silky smooth nyloned covered legs reflected the light just right, so that there was a thin sliver of light resting on her thigh, all the way from her knee to the hem of her skirt. I think I gulped as she spoke to me.

I don’t remember what she said, it didn’t matter. My brain was filled with the thought of running my fingers over that silky nyloned thigh of hers and that was all that mattered. Sheila leaned over to talk in my ear and when she did so, stretched out her left leg to touch the floor for balance. I saw all of her lovely long leg from her high heel to the edge of the lace of her nylon stocking, where her skirt slip up another inch. Blood must have rushed from my head as I recall becoming slightly dizzy.

What she was telling me was that she wanted us to go get a fresh drink, away from here. We did, and as I leaned against the wall next to her, I had to tell her how exciting she looked a few minutes earlier. She asked if I liked stockings, and I replied absolutley on her. I told her I wanted to touch and caress them and kiss them. I wanted to feel her stockinged legs on my cheek, I wanted to explore them from top to bottom and top again with my mouth.

I think she almost dropped her drink as she grabbed my hand and said let’s go. As I think back, and wonder if that wasn’t the moment that she began her total control over me. Well, we’re married now, 14 years. And any time she wants to make love now, all she does is slip on a pair of stockings and heels and I’ll do anything she wants. For as long as I can, too.