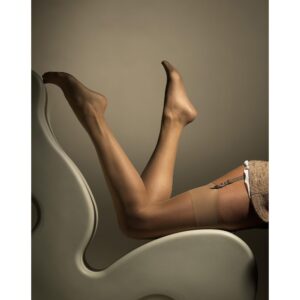 – I am a genuine nylon stocking fetishist. At 50 years old, I have been consumed with the sight, touch, and feel of sheer nylon stockings since childhood (about five years old). Recently divorced, I long to meet a woman who understands my fetish, and realise the power that she could have over me. I guess I’m saying that I long to be controlled by a woman with the intelligence and insight to use nylon stockings to her advantage. The ultimate would be to both wear sheer nylons or even very sheer pantyhose while making love.
The dilemma presented here is that fewer women are wearing sheer stockings or sheer pantyhose, much to my disappointment. Secondly, I think it is impossible for a woman to realise the unbelievable sensation and excitement I, as a male, get from sheer nylons. I can only hope to meet a woman who understands how powerful this fetish is – it will never go away – and know that she could use it to derive much enjoyment for herself.
What makes matters more complicated is that I am stuck on the sight of beautiful legs in high stiletto heels. I guess you could say I am the ultimate ‘leg man’. I don’t like escort services or fetish parlours because they cater to so many different desires, none of which they fully understand. Besides, I long for a more lasting relationship than that forum could provide. Women who don’t exploit the power of nylons have no idea what they are missing. Not that all men could be controlled like I could, but most men at least enjoy this ‘look’. Nothing is more disappointing to me than to see a beautiful woman dressed beautifully wearing high heels and bare legs.
How does someone like myself meet a woman with the beauty, understanding, and intelligence to recognise her potential power of using nylons and pleasure that she could derive? How does one express this desire without sounding weird or perverted. I know there is that special woman out there somewhere. I just haven’t figured out how to find her.
– The best way is to find a lady that you connect with on a personal level, and meet her needs. Treat her like a lady. Do the things for her that make her feel good about your relationship.
After you have a loving, trusting relationship, share with her your needs and your desire for a relationship with a lady that displays her elegance. Buy her gifts of fine lingerie, and sheer stockings.
But, treat her like a lady. Be attentive to her needs. Providing for her needs will encourage her to provide for your needs. With so many ladies seeking relationships, you shouldn’t have trouble if you remember she sees with her heart and brain what you see with your eyes.

Fetishes are so common nowadays but they are often handled in the wrong manner. It’s okay to be drawn to something but you have to remain in control. So many with fetishes cross the line from an avid lover of something to a creep. How you express your likes to others truly gives a reflection of yourself.

When trying to have your significant other be receptive to your fetish, you have to a) make them feel appreciated and b) make it about them. Quite often partners will be receptive to a trial but your approach determines that.

I am an author of literotica involving polyamorous couples as well as bisexual women and lesbians. I used nylon and foot fetish for my stories because they are very common. Women like men with strong hands and as many as 60% of men (though some won’t admit it) like women with nice feet. I was sparked to write my series of e-books after reading an article in a magazine titled LEGS while stuck at a truck stop in a snowstorm. I was honesty surprised at how straight and plain it was. There was no storyline. To support the story the used a photo of Czech model Vendula Bednarova. Most people would pay no attention to what’s written seeing women like her but as you can tell, I like to write.

With those stories came men who asked me for advice on how to introduce their fetishes to their partners. I’m by no means a sex therapist but I have read books on the topic and believe to a degree it’s a science. I call it that because you have to be willing to experiment.

Below are a few of the things I told them. Like I said I’m no therapist but I have ha d a 90% success rate. That’s as in 90% of my girlfriends getting involved in trying things I liked. Remember though, it’s give and take.

1)Be in control of your fetish. Don’t let it control you.
2)Be tasteful in your introduction. Adult film is not a teacher. It’s an act.
3)You’re not a dog. Don’t lick and drool in an erratic manner.
4)Spending big money is impressive but simple things make bigger impressions.
-Try running a bubble bath followed by a massage. Set up tea light candles for an atmosphere.
5)Get your partner used to touch in areas that you’re drawn to. If you like women’s feet like I’m assuming members of this do, offer a foot massage. Or you can step it up a notch and a basic pedicure (footbath, foot scrub, foot massage and toenail paint). If done right it’ll be viewed as romantic.
6)Remember adult film involves a lot of women wearing stockings or pantyhose (black in particular). So women might feel wearing such attire makes them feel like a slut or that you think of them that way. Make them feel sexy. Help put them on. And CONTROL YOURSELF!
7)It’s about them not you. As pleased as you are to see them appease you and your desires, make them the focus of pleasure. I can’t stress this enough. If she likes it and can be aroused by it, you’ll be able to incorporate it into your relationship on a regular basis.
8)When it comes to nylons and hosiery, expensive isn’t always better. SILKS brand can be found at most drug marts and many women I’ve spoken to (or been involved with) like the feel. Save the Wolford’s for down the road.
9)When introducing nylons as an accessory to lingerie, start with stockings. Many women don’t like the feeling of pantyhose. With a reinforced toe or waist, they can be uncomfortable if your partner isn’t use to wearing them. Many women who don’t wear them find them thick. And unlike the 70s and 80s, they aren’t the choice of women who want to display their femininity. If pantyhose is your thing buy her crotchless or suspender hose. You can go online and get either for under $10 a pair. While you might think I recommended them for bedroom fun (you might get there if you’re nice), I actually recommended them for comfortability.
10)Respect that she’s out of her comfort zone and make sure to reassure her. This is where your words and your touch can make a huge difference.
11)She was born a princess. Learn to make her feel like a queen.
12)Talk about things after your interaction as well as during. Find out what she likes. For example during a foot massage, “How does it feel when I rub here?” On the topic of foot massages, read up on reflexology. believe it or not a good foot massage followed by calf rub can help her facilitate an orgasm easier. Her feedback is important and taking an interest in wanting to know her likes and dislikes will keep her intrigued.
13)Be discreet and respect her privacy. Don’t brag to your friends. No pics of here or elsewhere. Keep them to yourself.
14)Read a good book on the topic of sex. And if you involve the use of sex toys, don’t use items used on a previous partner.
15)Stay off social media, making an ass of yourself and hiding behind a screen. Your posts are an extension of your mind. Be seen as a man comfortable with his sexuality and with particular interest rather than a socially inept creep.
16)Ease up on the porn. You can have her watch a soft movie with you where women reflect your interests but don’t be spending 15 minutes in the bathroom three times per day.
17)FINALLY, practice the art of human visual interaction such as Skype rather than sending d*** pics. You may have something to show. But leave what you have to their imagination. Women are mentally stimulated first. Stir their mind.

You probably think to yourself, “Who is this guy to tell me how I should or should not do what I like?” And to a degree, you’re right. You do not have to listen to me. But so many women get turned off by men with fetishes of this nature and really that’s not their fault. It’s because of what they see and the manner expression/how it is conveyed to them.