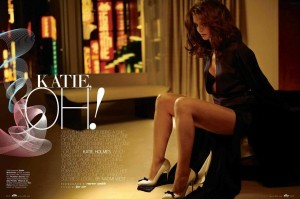 Kate Noelle “Katie” Holmes (born December 18, 1978) is an American actress who first achieved fame for her role as Joey Potter on The WB television teen drama Dawson’s Creek from 1998 to 2003. Since Dawson’s Creek, Holmes’ career has consisted of movie roles such as in Batman Begins, art house films such as The Ice Storm, horror films such as Don’t Be Afraid of the Dark and thrillers including Abandon. She has also played on Broadway in a production of Arthur Miller’s All My Sons and had various guest roles on television programs such as How I Met Your Mother.