You are here: Home / Archives for Jenny McCarthy 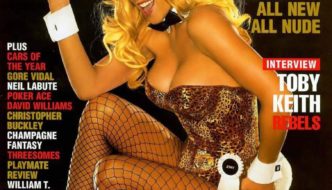 Jennifer Ann McCarthy (born November 1, 1972), sometimes credited as Jenny Wahlberg, is an American anti-vaccine activist, actress, model, television host, author, and screenwriter. She began her career in 1993 as a nude model for Playboy magazine and was later named their Playmate of the Year. … END_OF_DOCUMENT_TOKEN_TO_BE_REPLACED