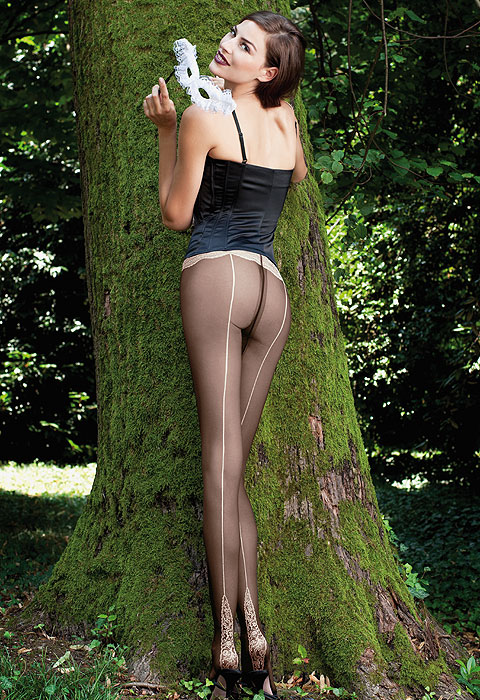 – Earlier today I came across some of my daughters magazines which she read when she was 16 in 1997. One of them was Sugar a magazine for teenage girls which had a competition in it to win make-up, lipstick, an ultrabra and Sock Shop Classic ultra sheer tights with seams (small size nearly black). I was quite surprised to find a magazine aimed at this age bracket offering seamed tights as a prize. Am I unusual to find this unacceptable ??.

– From what I have heard of the contents of some of the teenagers’ magazines, with explicit references to some of the most sexually depraved activity possible to imagine, I hardly think that offering seamed tights – tights, not even stockings – can be regarded as in any way unacceptable by comparison!

– I was 16/17 when I first started to wear stockings and suspenders as I have said in previous postings I was also a member of the Salvation Army and wore seamed stockings as part of my uniform and I was only 16/17. Tights did not agree with me. Every time I wore tights I got thrush. I have always worn stockings since although I tend to wear hold-ups more often. At the time most girls/women in the Salvation Army wore seamed stockings so it just seemed to be normal.

– Yes, but do you not feel that the exposure in a multimedia environment of a young girl wearing anything with sexual signals, such as seamed hosiery worn by teenagers is encouraging some of the ‘not quite of stable mind’ to think that it is healthy to abuse them?

Sadly we are not in the ‘innocent world’ of several decades ago when young girls wore hosiery which was seamed and acceptable. Too many messages are being portrayed by the ‘plastic and false’ environment which our children are being unwittingly told to impersonate and spend their pocket money on.

The innocence of children should be protected and these magazines – which unfortunately are more concerned with circulation wars and readership – should have a serious re-think.

– I was in no way condoning these teenage magazines and their irresponsible attitudes, and the fact that paedophiles may well get their kicks out of reading such material. I was merely saying that, in relative terms, seamed tights (or stockings come to that) are not sexual objects per se – and we should not condemn those who wear them, nor condemn any magazine that might offer them as a prize.

I’d be quite happy to see such magazines banned altogether. I actually think they are far more damaging than overtly pornographic magazines, because they are AIMED at teenagers, and often read by very young ones. At least ‘top shelf’ magazines are not AIMED at children, and efforts are usually made to ensure they do not have access to them.