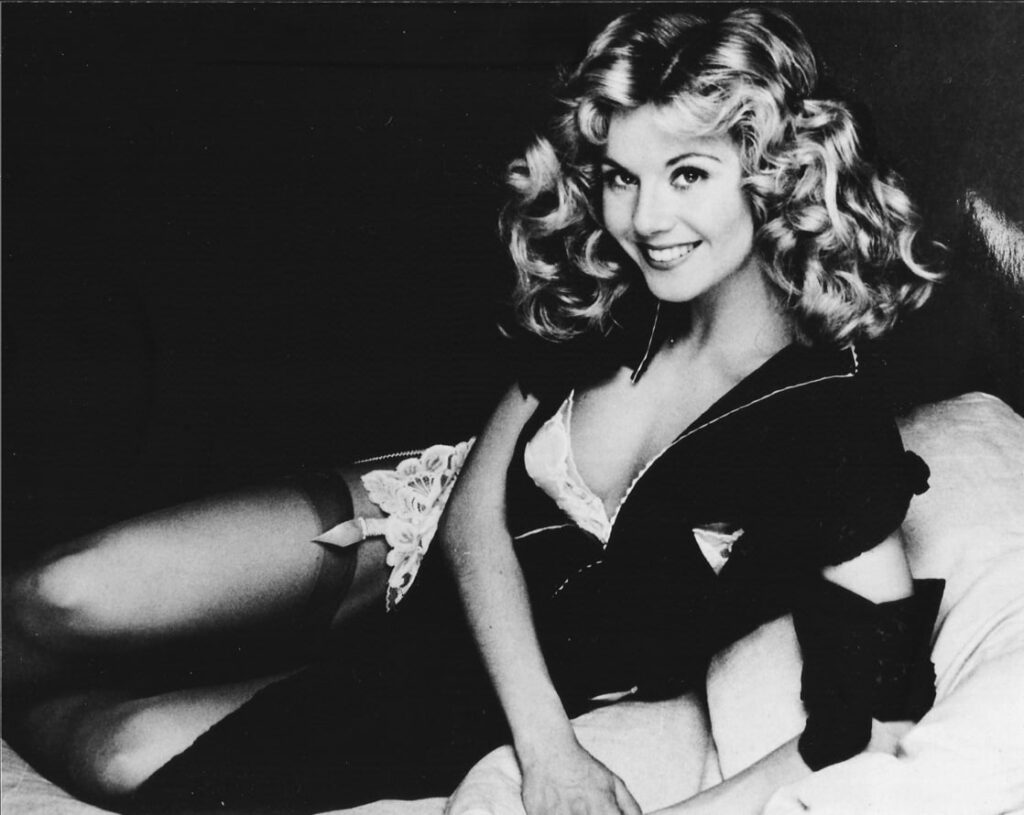 There are stocking lovers all over the world but for some reason British men seem to have a bigger fixation than most – witness the way stockings feature in sitcoms and other TV shows:

Maybe this is just my ‘selective memory’ but my definite impression is that British TV scriptwriters will grab any pretext to throw in a stocking-related scene!”

In your list you forgot one of the ultimate British stocking programmes of the 1980s. That was Jane starring the wonderful Glynis Barber. If you haven’t seen it, imagine a beautiful blonde actress in a part which requires her to shed her clothes every couple of minutes to reveal her in bra, French knickers, suspenders and tan FFs. The series was based on the 1940s comic strip from the Daily Mirror.

I have two photos of her dressed in this kit…she was FANTASTIC! The show was repeated on UK Gold but I have only ever seen it at a convention.”

Glynis Barber as Jane was truly wonderful. Also Suzanne Danielle played the female baddie and there was a wonderful scene where she slid down a banister with black FFs on full display.

I used to have the whole series on an old V2000 VCR, but sadly it’s bitten the dust now. I’ve always longed that the BBC would repeat the series…”

In reading all of the posts in this string, one thing that strikes me is that all of the shows where stockings could be sighted were shows portraying people in real circumstances, or in comedic situations that could happen. What I’m trying to say is that it seems that for you all across the pond, stockings aren’t looked upon as the first indications of a woman with loose morals, as they seem to be here in the States.

Whilst I can’t disagree with a word above (except that “Women of Slender Means” was set in the Second World War – the scene of the girls climbing out of a window – vividly remembered by me – was after a bomb had hit the house), certain American examples also lead me to believe that our American cousins are similarly fixated:

But, more importantly, European films and TV programmmes have far more stocking content than most English films or TV series. A casual glance at satellite TV will confirm this. Some of their soap opera type programmes are full of them.