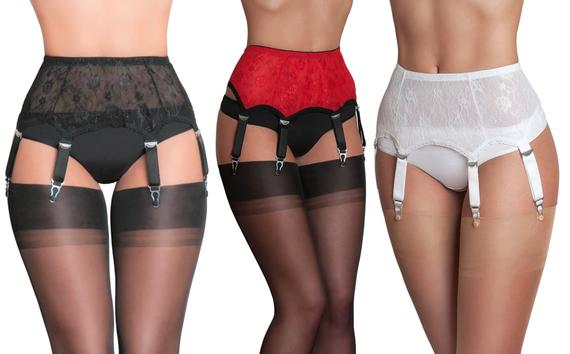 – I’ve had a delightful evening’s read through here for the first time. This site is a wonderful blend of the desirous and those wanting to be desired. As a heterosexual female, I find it strange that I’m wondering in which category it is that I fit.

My first experience with a garter belt and stockings was at 15 years old: A high school dance. I thought I’d like to feel sexy. I had this feeling that particular males had x-ray vision, etc. But, at 15, who can afford a good set of stockings and more than a tissue paper version of the garter belt? By the second round of the disco ball, I’d popped a plastic clasp and drooped a cheap and now ‘run’ stocking well below my skirt. Mortifying! So, I relate fully to the woman who posted about her disastrous experience as a teenager.

But as a 32 year old woman, now this is altogether a different thing. I’ve been slowly building my repertoire of stockings and suspender belts, with a lot of help… (Thus the transfer of terminology from garter belt to suspender belt.)

And something has happened.

On my last airplane flight, I sat tugging on the toes of my pantyhose, which were suddenly constrictive and paining me. And as I shifted my unilingual butt and crotch, suddenly I felt claustrophobic from the waist down. I began to hate my pantyhose!

I had spent a full week on vacation, dressing up each night, delighting in the process. Stockings and suspenders essential! And on a particularly sensitive evening I walked, pressing a clasp bump under my fingers. I kept stroking down over the clasp and along the suspender. It was pacifying.

– My view is that I hope ladies wear stockings because they want to and like the feel in their own right. They are objects of desire – but do make you even more desirable

– Sorry Angela, I don’t have any ideas on this subject. But I do have a question. What is a unilingual butt and crotch? Maybe I missed something in my anatomy classes but, until this morning, I never realised these orifices had the power of speech! Just curious.

– I think it can be both but it isn’t always.

Some women tell me they love to wear stockings because it makes them feel good – the latest just this week in Manchester. These women often seem to be the more confident type. Some even say they do it for themselves and not for men. Nearly all say it makes them feel more feminine, sexy or confident or special.

Some women do wear stockings to attract men or to make themselves look more appealing – I think this can be the case with the so-called ‘plain’ woman who wants to make herself a little more attractive. And it sure works – looks aren’t everything, even for men! Sexiness counts for a lot. All women play on their best assets to make themselves appealing, and I have known lots of not-glamorous women who have been blessed with legs to die for!

Just as there are so many different types of women, the reasons can vary – some women after all don’t like the idea of wearing stockings because they have been conditioned against them.

I wouldn’t be surprised if in your case it might be both, that you like wearing stockings for yourself, but also because it does make you more attractive, whether you are really glamorous or just plain handsome – but then, lucky you!

– In my experience, the want has always been there. But, much more recently, the wearing has become quite important. Both the desire and object of desire facets are neck and neck now. I guess you’re right, it doesn’t have to be one way or the other. Though I note that I am grappling with the sudden importance for me. Perhaps it is tied in with the psychology of the man I began wearing them for (an s and s die-hard) and it has now transferred to my own feelings?

I think there might have been a time when I would have challenged you on the practicality of stockings and suspenders. Of course that was before I tried the real ones… And now I know. It’s true! They are so practical! I was dying for them on the airplane.

I am now noting something else. Yesterday I wore them under a long skirt to meet a girlfriend for coffee. That was entirely for me. No one would have ever known.

– I do not know if I was the lady you spoke of who had the disastrous problem with stockings as a teenager but I can tell you my experience as a young teenager with stockings was not at all good. The stockings I spoke of were fishnets and at the time miniskirts were in, my family was very conservative and made sure that the skirt I got was made with panties of the same fabric sewn inside as one garment. I know that sounds confusing, but at any rate I don’t think I realised that I had to wear a garter belt to keep up the stockings and my skirt just wasn’t long enough when sitting to cover the garters. I rode in an all boy cab we used as our school bus and I was the only girl, so you can be sure the boys all noticed and I was quite embarrassed. I felt so uncomfortable I couldn’t wait to get home from school and get them off. I was just 13 years old and that was in 1967.

I am now 46 and just five months ago I decided after seeing the idea of stockings and a garter belt in a book to try them again, but this time I got the stretch stockings, and what I thought was a good garter belt from Victoria’s Secret, and started to wear them a little each day. I gradually began to get more comfortable with stockings after I discovered this site and all the help it’s given me has been great

You make a fine point about the bra straps. And I agree. By the way, I like the bumps. And I don’t mind people seeing them. I don’t think they need to be subtle. And I like short skirts too, for summer evenings, when it is more than likely the stocking tops will show, maybe even the clasps themselves.

I saw a photo a few weeks ago in a newspaper – The London Times, I think. A Paris model was wearing a very schoolish outfit: short skirt, nylon stockings and ribbon’d clasps. A good three inches of the suspenders were showing between the skirt and the stockings. Thigh too, of course. I loved the look! I believe it will soon be about how to show the bumps, not hide them. Maybe the worry will be about whether or not to show the top of the suspender belt?

There is a new generation of wearers out there, me included. We do not have the same issues of having to wear them and having them associated with the awkwardness of growing up. I don’t think the embarrassment will even occur. It will just be a fashion statement. My guess is bumps just ain’t a big deal!

– You sound like a woman after my own heart! I think you’re right; it’s a generational progression. The women of my youth, the ’50s and ’60s – hell, I’m revealing my age! – mostly didn’t worry if they showed a stocking top when cycling or crossing their legs, nor about the bumps. I once saw a nun in Dublin bend over in the street, revealing several plump inches of thighs over her black stockings… In the late thirties, the fashion was for tight skirts and heavy suspenders underneath, so that one fashion writer wrote that it was as if the models were wearing their suspenders on the outside. Happy days!

Then, in the feminist decades of tights, women came to identify stocking-wearing with tartiness -I guess because they thought only prostitutes and men’s mag models still wore them (wrong, of course: I was married to a woman who never ever went over to tights) so for them any hint of a stocking was ‘tarty’. So, if you wore them occasionally, ‘hide the bumps’!

Now, with the younger generation, those with no hang-ups, as you say, can wear them as a statement of their free choice; can even show the suspenders if they want (I saw the same picture in the London Times). And wearing elegant stockings becomes, as has been pointed out elsewhere, a ‘classy’ thing to do. In three generations it’s moved from ordinary to tarty to classy. Though of course the majority still haven’t caught on to the recent change. I hope they will!

Stockings: facing extinction, or not?