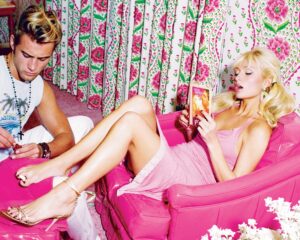 Paris Whitney Hilton (born February 17, 1981) is an American heiress, socialite, television personality, businesswoman, fashion designer, entrepreneur, model, actress, producer, author and singer. She is the great-granddaughter of Conrad Hilton, the founder of Hilton Hotels. Born in New York City and raised in both California and New York, Hilton began a modeling career as a teenager when she signed with Donald Trump’s modeling agency, T Management. Her hard-partying lifestyle and rumored short-lived relationships with Leonardo DiCaprio and Oscar de la Hoya led her to earn a position as a fixture in entertainment news. For her notoriety as a socialite, Hilton was hailed by the media as “New York’s leading It Girl” in 2001.

Hilton gained significant notoriety for a sex tape, which was released shortly before the premiere of the reality series The Simple Life (2003), which was a huge success and brought Hilton and co-star Nicole Richie to an international recognition. Hilton then released her 2004 autobiography Confessions of an Heiress: A Tongue-in-Chic Peek Behind the Pose, landed a supporting role in the 2005 horror film House of Wax, and recorded the 2006 music album Paris. She later starred in the series Paris Hilton’s My New BFF (2008) and its two spin-offs, Paris Hilton’s British Best Friend (2009) and Paris Hilton’s Dubai BFF (2009). Hilton has since done a voice role in the TV movie The Dog Who Saved Christmas Vacation (2010) and appeared in the reality show The World According to Paris (2011). She recently appeared in Sofia Coppola’s The Bling Ring (2013).

She has appeared in several lists compiled by magazines such as Maxim, FHM as well as Stuff. She is also regularly placed on lists composed by Forbes magazine and was named one of the “100 Hottest Women of All-Time” by Men’s Health. Critics also suggest that Hilton epitomizes the title of famous for being famous; she is an example of the modern phenomenon of the “celebutante”, the celebrity who rises to fame not because of their talent or work but because of their inherited wealth and controversial lifestyle. In recent years, she has parlayed her media fame into a fashion line and various perfumes with her celebrity endorsement — her fragrances have reportedly earned $1.5 billion. Currently, there are 44 Paris Hilton Stores worldwide and her brand includes perfumes, handbags, watches, footwear, among other products. Hilton earns over $10 million a year from her products sales and as of 2005 she was paid $300,000 for appearances in clubs and events. 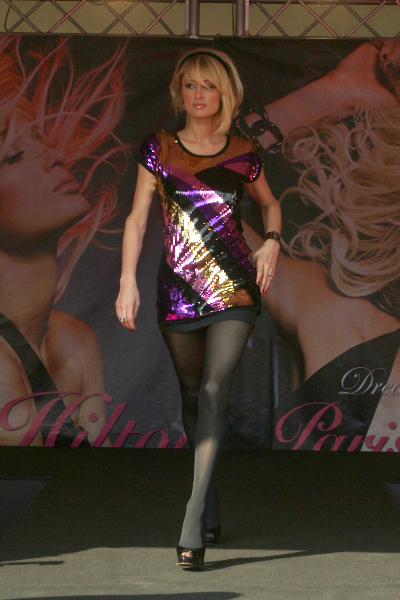