You are here: Home / Archives for Dita Von Teese 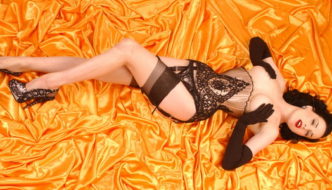 Dita Von Teese was born Heather Renée Sweet[2] on September 28, 1972, in Rochester, Michigan, the middle child of three daughters. Her mother was a manicurist and her father was a machinist. Von Teese is known for her fascination with 1940s cinema and classic retro style. This began at a young … END_OF_DOCUMENT_TOKEN_TO_BE_REPLACED